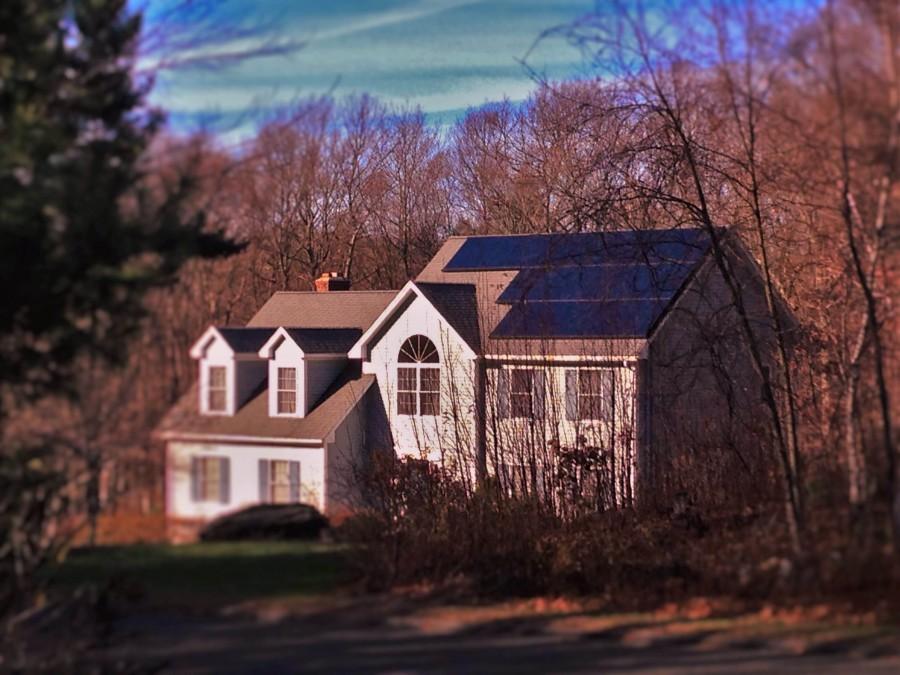 Solar panels on a residential house, something Connecticut will eventually do in the future, on their state buildings.

Solar power is popping up all over the country as is has become a very good renewable energy source. Many homeowners are moving towards solar energy as a way to cut down their energy bill. In a relatively rich state such as Connecticut, where taxes are extremely high, solar panels are not being placed on state buildings. Although recently considered by state officials, Connecticut tax money just isn’t going towards the development of solar on Connecticut state buildings and infrastructure.

Connecticut is behind on its solar usage, especially because other states such as Massachusetts have started to incorporate solar panels on the roofs of their state buildings since 1997. While there have been several developments in past years in Connecticut, there hasn’t been a substantial increase in solar usage.

If Connecticut were to put solar panels on state buildings, it would allow Connecticut to reduce spending on electricity. Massachusetts claims to produce around 16.3 million kilowatts per year, which translates to over $1.9 million per year in total cost savings, not including residential solar. In contrast, Connecticut produces a measly 20,000 kilowatts per year, only .12 % of its northern neighbor, giving almost no savings to their $40 million a-year electric bill.

There has been a mix of financial and technical issues that is setting the projects back states Dannel Malloy’s energy officials. The officials have run into issues with the utility bill recordings for the state. The state does not know the optimal location for the panels. Also the state has a money issue, with ongoing budget problems, forcing it to cut spending rather than develop anything new. Although the solar panels could reduce spending on electric bills resulting in lower taxes for Connecticut residents, Connecticut may see a long time before solar becomes widespread.

Lance Dyer, a heat/air-conditioning salesman and a homeowner in Bristol CT, who installed solar-panels on his south-facing roof, says, “Solar panels are a no-brainer, I switched to solar two years ago and my electric bill has been significantly reduced.. It’s green and practical. I would never switch back.”

Lance now only has to pay for the leasing of his solar panels as his house gets direct sunlight and produces an abundance of energy.

Solar energy is environmentally friendly and it harnesses the sun’s potential energy to create energy that the state can use to cut spending. It is a technology that is going to help the world in the future. Solar may help to limit the effects on global warming, by not having to burn as much fossil fuels. While it’s not entirely clean to make the panels, once they are up and running, they are 100% clean and earth-friendly.

Eric Richards, a shop teacher at Lewis S. Mills High School, says, “My large field solar array has been installed and will be online this Thursday. My wife and I hope to create enough energy so we cut our bill down to $0.”

The Labor Network for Sustainability believes that by 2050, Connecticut can create over 7,000 jobs per year and reduce the electricity costs by $78 million. For the future generations, transferring to solar is important, for the strength of the economy and the health of next generation. It’s good because Connecticut doesn’t have to choose either economy or environment, it can chose both.

Connecticut isn’t in the best of financial situations at the moment, however in upcoming years plans to switch to solar are going to be vital. It’s the wave of the future, and Connecticut needs to keep up.