Seniors give thanks for memories, long awaited success 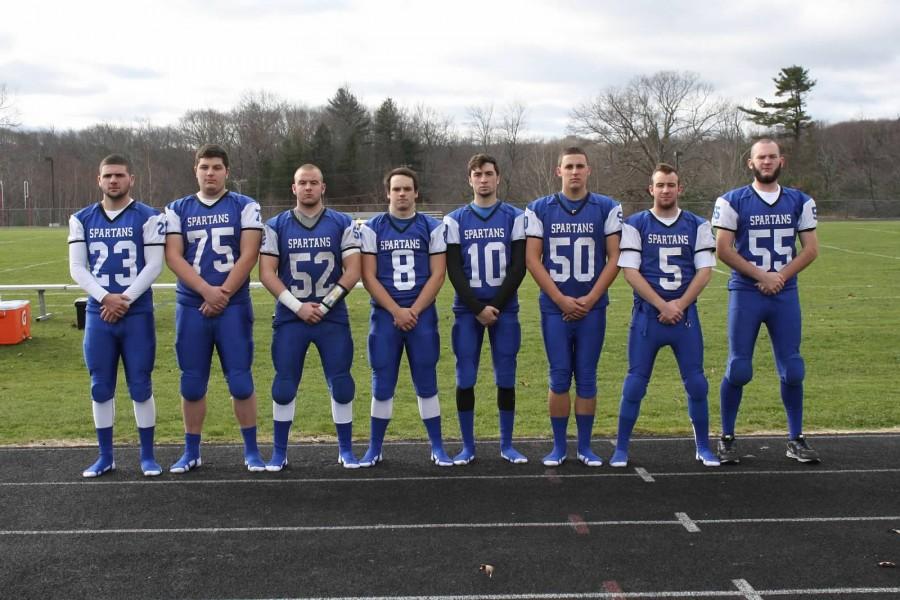 Sean Burke and Collin Kennedy, Contributing writers
November 26, 2015. Thanksgiving Day. The Lewis Mills football team’s seniors put their pads and cleats on, for possibly the last time. Focus and silence pervaded the locker room. If they won on this day they would have a chance to play in the playoffs, but it was a long shot. The seniors were going out to win.
They had a 6-3 record coming into the game against the Nonnewaug Chiefs. The Spartans hadn’t won against the Chiefs in three years, and the seniors of Mills had been waiting for the opportunity to play against them again.
The Spartans have had a rough couple of seasons. The 2016 senior class had been through an 0-10 season their freshman year and two, 2-8 seasons as sophomores and juniors. The seniors were hungry to end that streak and were not going down without a fight.
Thanksgiving meant the end of the football world for most of the seniors. Traditionally, it is the game where senior players are introduced and walked on the field by their parents. It’s a big day, and a big game.
The game began after the emotional festivities of Senior Day. The game remained a stalemate, and both teams stopped each other’s offense. The defensive side was putting in work. Mills’ defensive line was not allowing anyone up the middle, and the team’s backers and corners were picking off anyone who ran to the outside. Each team was battling and playing with heart and intensity.
The first score of the game came in the 4th quarter by Nonnewaug with a touchdown and a good point-after attempt, making it 7-0 Nonnewaug. The Spartans have been faced with adversity before and knew how to handle it – and how to use that to their advantage. Then Mills made its first score of the game. In the middle of the 4th quarter Collin Kennedy scored, and the point-after attempt was good, tying the Spartans and the Chiefs 7-7.
For the rest of the 4th quarter the ball went back and forth many times, until the Spartans landed on the 1-yard line with little time left in the 4th quarter. It was do or die for the Spartans. From 1 yard out Michael Ciccarelli powered through the Chiefs’ defensive line, scoring a touchdown for the Spartans. The point after was good, making it 14-7 Mills. The Spartans now just had to hold off the Chiefs and the game was theirs. The Spartans defense held the Chiefs offense, and the ball went to Mills. The Spartans held off the Chiefs to break the four-year losing streak, giving the Spartans a 7-3 winning record.
*Writers and seniors Sean Burke and Collin Kennedy played on the 2015-16 Spartan varsity football team.
Delete Image
Align Left
Align Center
Align Right
Align Left
Align Center
Delete Heading