The Spartan Scroll • May 5, 2016 • https://lsmspartanscroll.org/1821/arts-and-entertainment/recording-actions-and-music/ 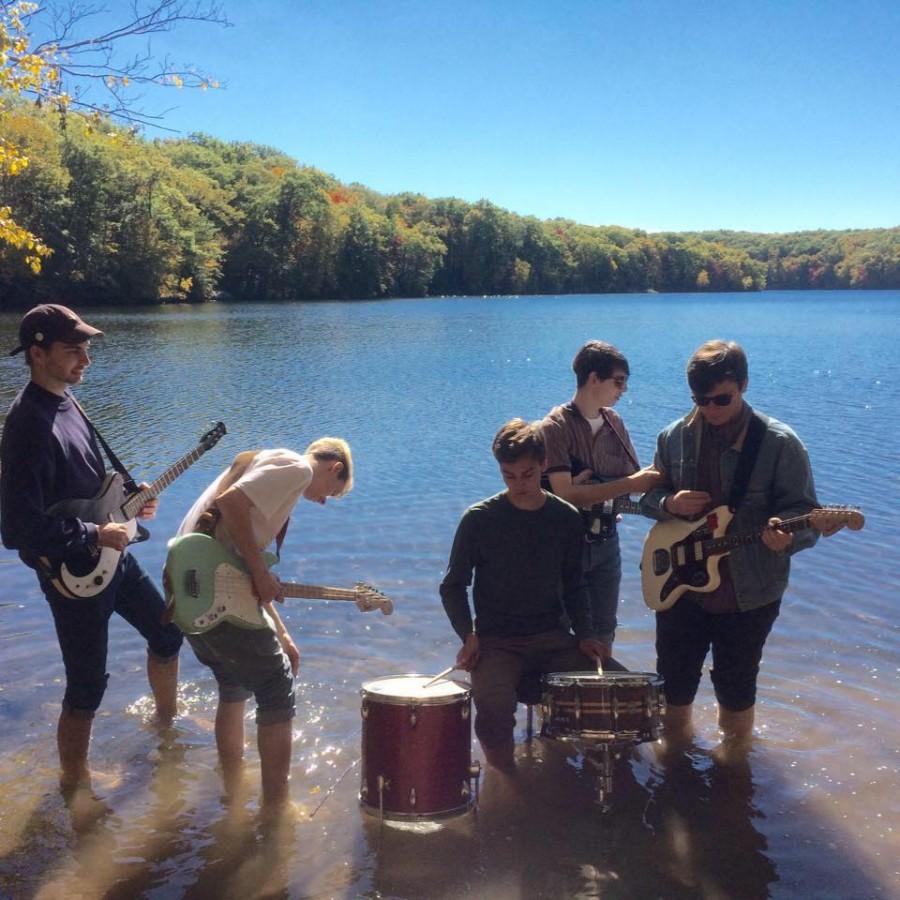 Four musicians sit in chairs, holding their guitars and drumsticks, before the red light comes on. Quiet. Only the hiss of the computer in the background is consuming the sound of the room. The producer hits the illuminated button on the desk. The recording has begun.

10:15 a.m. Jeremy Stern, Brendan Dyer, Parker Nye, and Tom Nagy, make up the band “Furnsss.” Prior to the recording of their first album they wish to put out in mid-2016, the four talented musicians trudge down the stairs with their bulky amplifiers and gig bags, staring at the display of record cover frames pinned along the wall. The album covers of Pink Floyd, The Police, and The Doors decorate the entrance to the massive basement recording studio. Studio foam covers the entire right wall to dampen overtones while keyboards, amplifiers and mic stands are positioned on the left wall. On the far wall is a large desk with a complex component rack for audio­processing, two computer monitors, large speakers, and vintage reel-­to-­reel tape decks. The musicians throw down their equipment and gaze around at the room. Jeremy, a talented piano player, gravitates directly towards the organ on the left side of the room, and begins to play every song imaginable. Brendan, a stickler for being on time, immediately finds a power outlet and begins to plug in his equipment. A conversation about the hit television series, “Twin Peaks,” is underway between the band mates.

10:30 a.m. “Let’s go you guys, we only have a few hours to get this done,” says Brendan as he plugs in his last cable to his reverb pedal. At this point nobody has begun to set up. Brendan starts to get furious and impatient so he turns his guitar all the way up to get the band mates’ attentions. It works. The other bandmates finish up their previous activities, and Kraftwerk starts playing in the background. Jeremy sets up his 1975 Fender Twin Reverb, Tom finds a bass guitar hung on the wall and plugs it into his amplifier, and Parker sits on the drum throne anxiously searching for drumsticks in the massive heap of junk that behind the blue sparkling drum set.

11:00 a.m. The band warms up by playing random notes all at the exact same time, creating a wall of sound and noise. Earplugs are passed around to the now-irritated musicians, as Brendan counts off four beats to start the beginning of a song. The music is sloppy the first time through. However, as they get into it more, the musicianship improves. The musicians practice for a bit until it is time to record their music onto the computer.

“This is only a home studio so we’re going to have to get very creative as to how we record this,” says Jeremy, as he trips over cables in his boots. “Although this basement is an amazing setup for recording, we are limited to the amount of instruments we can record at once.” Five microphones are positioned on the drum set while the other three are positioned on the guitars. Cables of all different lengths and colors slither along the floor like snakes all into a 19-inch rack unit that lights up like an alien spaceship because of all the LED lights on it. The volume levels are set, and so are the effects on the effects rack to get the desired sound. WHICH IS WHAT?

11:30 a.m. The musicians are antsy, eager, and impatient to start recording their music. Setting everything up in the home studio is not a simple task. An hour and fifteen minutes has passed and no music has been tracked yet.

11:50 a.m. The band runs through some last-minute changes in their song “Roll with it,” fixing drum fills and simple guitar leads to make the song sound as professional, and simply as good, as possible.

“I think you should go from the e# to the Ab but use your delay pedal to fill in that gap of sound. And I also think that that drum fill is a bit too simple, It needs some pizzazz, use some of the toms to bring it out a bit, okay?” suggests Brendan, talking in an impatient, quick voice.

12:05 a.m. The tension builds as everything is set up and the producer is ready to hit the record button. The last minute adjustments have been made and the band mates are looking to nail the recording in the first take. Deep breaths are taken all around the room. Silence.

12:08 p.m. Four musicians sit in chairs, holding their guitars and drumsticks, before the red light comes on. Quiet. Only the hiss of the computer in the background is consuming the sound of the room. The producer hits the illuminated button on the desk. The recording has begun. The counter rolls forward as Brendan counts off those four beats again. From the first note played until the last note, the recording takes effect. Furnsss now has music recorded, to share to the world. Maybe this is the start of an era for them, a stressful day indeed may result in an extraordinary life in their future.

Editor’s note: Contributing writer Parker Nye is a member of the locally based, regionally touring band Furnsss. Check them out May