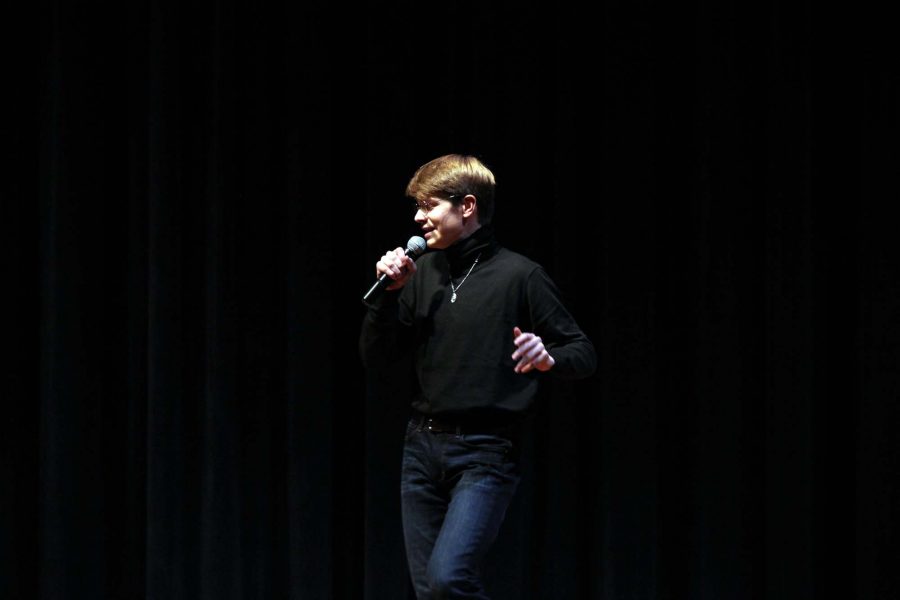 Mr. Mills 2016 J.D. LaBerge performs an acoustic rendition of the Sir Mix-A-Lot song "Baby Got Back."

One  young man wore pink tights and danced to “The Nutcracker,” and another played slide whistle renditions of songs such as “The Final Countdown” and “Bring Me Back to Life.” Unconventional sights like these can be seen one evening a year, when the title of Mr. Mills is passed on to a new senior male student of LSM High School.

What is exactly is the Mr. Mills Competition?

On Nov. 18, the sixteenth annual crowning of Mr. Mills demonstrated self-

depreciating characteristics of the daring contestants. The crowning of Mr. Mills is a parody of a Miss America pageant, but in this case the senior men compete for their “Miss America title,” as the title of Mr. Mills. The competition entails: an opening dance to Donna Summer’s “Hot Stuff,” a mock marriage proposal, an “untalent” segment and a “personality” outfit, among other feats.

The opening number “Hot Stuff” dance consisted of this year’s 12 contestants — Wil Coughlin, Michael Fellows, Andrew Geissler, Jacob Honig, Kevin Kryzwick, J.D. LaBerge, Shawn Magill, Griffen Mansfeild, Jack Martin, Will Ponte, Darian St.Pierre and Evan Taylor — dancing wittily in unison. After their dance, the men were introduced one by one, and escorted down the aisles of the auditorium by peers of their choice. One of the most memorable moments occurred when Magill was escorted up to the stage by Kathrine Duba and Melanie Senk wearing bathing suits and bath robes. As Magill climbed onto the stage, he disregarded his robe and was left wearing only a Speedo. He described himself as out-going, scrawny, and flipping awesome, as revealed by his bravery to stand on stage wearing nothing but a Speedo.

Behind the scenes was a sight to see. There were people going over lines,  rehearsing dance moves, grabbing props for performances and jumping with excitement. Many contestants such as Honig and Geissler stated, “It’s not like I expected,” and “It’s a lot more work than I thought, but it’s gonna be a lot of fun.” Even Principal Christopher Rau was awed getting ready for his very first time hosting the annual event.

“I’m incredibly excited,” said Rau, standing next to his female co-host for the night, senior Emily Ollero. “I watched the rehearsal and I thought it was hilarious. I haven’t changed anything from years past. So far we are moving on the line (between daring and risque), but hopefully we won’t step over the line.”

The judges of this year’s event consisted of teachers and staff like Mrs. Daniele, Mrs. Gaffny, Mrs. Rosenfield, Mr. Vitali, and Mrs. Wyzykowski. Their job was to score and keep notes on what each participant did, and by the end of the performances, agree upon who should be crowned Mr. Mills.

After the full night of laughs and smiles brought by a Michael Jackson reenactment of the song “Billy Jean” by Ponte, an interpretive dance by Honig to “America the Beautiful,” a cooking show in addition to some corny jokes by St. Pierre, and a hilarious soccer demonstration by Kryzwick, the night concluded with LaBerge’s crowning as Mr. Mills. It was well earned. He made the crowd laugh and smirk at everything he pursued. He started it all with his personality traits: “Involuntarily abstinent, emotionally hollow, and buttoned up,” joked LaBerge, and it only went from there. He reenacted a dance scene from “Napoleon Dynamite,” put on a wrestling leotard and pretended to struggle to pick up a stick with marshmallows on its ends. He even performed an acoustic version of the song “Baby Got Back.” Before he went onto stage, LaBerge stated, “I’ve been anticipating the opportunity; I’ve been waiting about 2 years.”

As the night wound down and he was chosen as the new face of Lewis Mills High School, he was filled with joy. Asked how it felt to be crowned Mr. Mills, LaBerge said: “It feels splendid, I practiced a lot, and I’m glad to see all of the effort come to fruition.”

He added, “I absolutely loved the experience and if I could do it all again, I probably would.”