Lewis Mills Got Talent? You Bet!

Annual talent show makes its way to the stage Friday 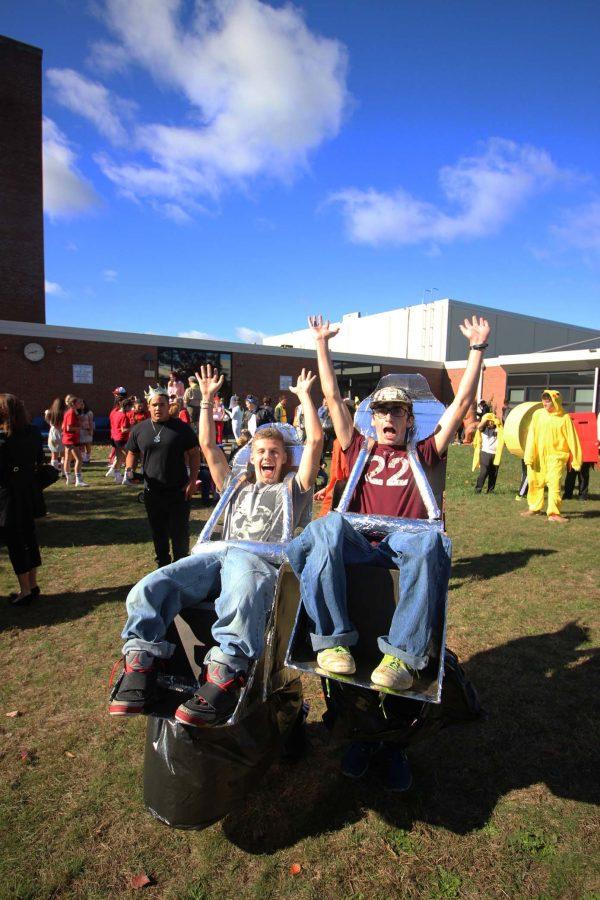 Singer and actor Jacob Honig, at left in this file photo from Senior Halloween, is among those preparing an act for Friday's Mills Got Talent show.

The stage at Lewis Mills High School is getting prepped for the talented and the brave this week. Rehearsals for the high school’s annual “Mills Got Talent” show are in full swing and ready to take off this Friday, March 31 at 7 p.m. The show has been a tradition at Mills, tracking back quite a few years when it was called “Battle of the Bands.” Over time, the show picked up other talents, such as magic acts, or dancing, which caused the change in the event’s name and focus.

“Five pins,” John Keegan emphasized. “My freshman year, a shy boy walked up on stage. By the end of his act, he had the crowd going wild while juggling five bowling pins.”

Keegan has been on Student Council all four years at Mills, working backstage on crew for two talent shows.

“It’s a lot of work, but it’s worth it when you get to see all of the talent here at Mills,” said Keegan.

Student Council Vice President Julia Rich is one of the driving forces behind the organization of this event. Rich is in charge of everything from managing sign ups to choosing hosts to finding judges.  Unfortunately, Rich has only worked in two talent shows over her three years prior. The 2016 show did not end up happening.

“It wasn’t advertised as well as it could have been,” admitted Rich. In the past, there have been big crowds because of large participation. However, last year, “there weren’t enough acts to draw an audience,” Rich said. Unlike last year, though, the forecast for this Friday is a full house. Rich anticipates it going really well considering there are over ten acts.

“I know what acts people plan on doing, but I haven’t seen any yet. I’m excited,” she said.

Among these acts is a senior who is no stranger to the stage.

“I’ve been doing musical theater and theater at the Warner in Torrington since 6th grade,” Jacob Honig said. He won’t be acting, though. The senior plans on again singing and playing piano in his third and final Mills Got Talent. Honig will perform “Love is a Losing Game” by the late Amy Winehouse and “She’s Got a Way” by Billy Joel. “My mom used to bring me to a mother-son jam circle when I was only about 2. That was when I began my musical career.”

Honig has been playing piano for 9 years, and singing since he was little kid.

Rachel Hedden, another senior, is performing in her first talent show this year.

“I’ve been in Rock Pop for 3 years, I just never thought to bring our band to the talent show,” she said. Hedden is a singer who has been belting for “as long as [she] can remember.” Having been in Rock Pop, she is familiar with the stage here at Mills, along with the other two in the trio, Peter Christiano and Nate Arnone.

“It’s my senior year, there’s nothing to lose,” said Hedden.

Admission for the show is $5.