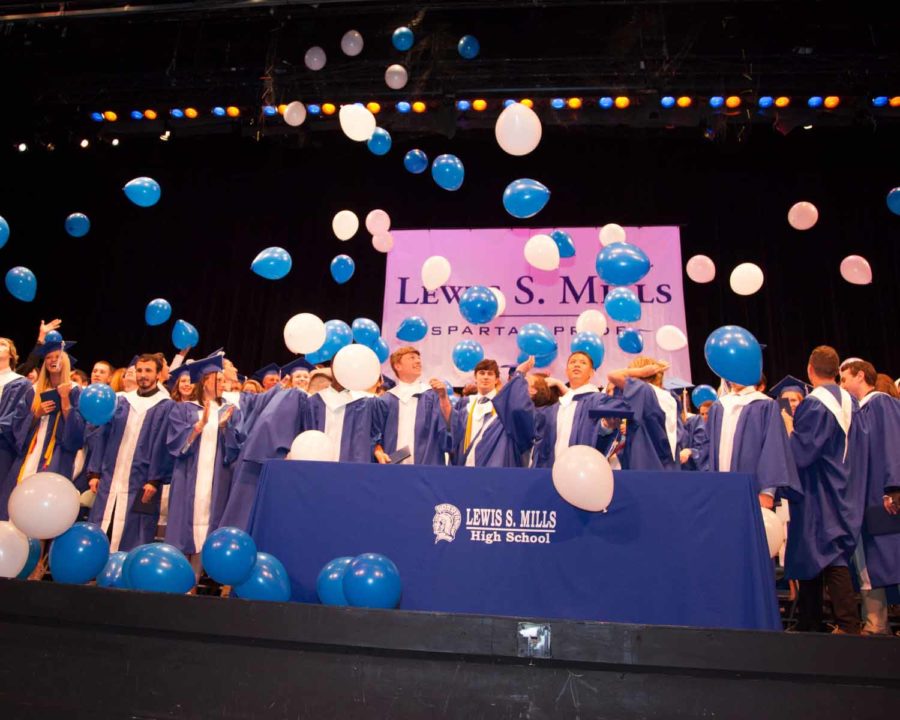 Students at the 2016 graduation wore blue gowns, marking the second or third year of a more gender-neutral approach to graduation garb at Mills. School officials and students revisited graduation gown colors this spring before deciding to maintain the all-blue gowns for seniors this June.

High school graduation: the day many have been dreaming of since elementary school. Grandparents, aunts, uncles, moms and dads all gather on this special day to watch their beloved graduate walk across the stage. This walk, along with a diploma, signifies the end of students’ high school career; closing one door and beginning a new chapter of their lives.

Although this time is an exciting one, many students across the nation are distraught over one thing in particular: the color of their graduation gown. Hundreds of graduating high schoolers across the United States do not want their sex or gender to define which color gown they wear at their graduation ceremony, according to New York’s Newsday. Regardless of the individual’s personal reason for wanting to wear a specific color, students still want to walk the stage on graduation day with their peers.

Historically at Lewis S. Mills High School, we’ve had gender specific graduation gown colors: girls would wear white, boys would wear blue. However, two to three years ago, a former principal reformed the system so that all solid blue graduation gowns were worn in order for every student to feel equal, and for an uniform aesthetic. Nevertheless, with the graduating Class of 2017, there has been chatter among students about considering a change back to gender-specific-colored graduation gowns. Some pupils who felt this way cited family tradition, and the desire to graduate wearing colors their siblings wore. Other students wanted to wear gender-specific gowns because they saw no reason to change a system that has worked well in the past.

This topic resonated with students, faculty, and parents, leading school officials to query students about the issue. Jacob Honig, a senior at Mills, desired the blue-and-white effect solely for the purpose of pictures looking “really cool.” However, Honig explained that he did not “think it is worth it to do that at the expense of other people’s happiness.” If someone’s feelings were hurt because of gender-specific colors, the gown color change would not worth the pretty picture, he added, explaining that he was content with whatever everyone else decided on because other’s happiness is more important.

Catherine Pietrafesa, another senior at Mills, wished everyone would continue to wear blue, just as years in the past. She exclaimed that “wearing the same color promotes equality which is very important in this day and age.” She believes that a uniform color would allow students to feel included, whereas separate colors would cause some to feel uncomfortable and like outcasts.

The secretary of this high school and mother of a student graduating this year, Chris Escobar, weighed in on the issue. Mrs. Escobar “thought it was a progressive decision for Lewis Mills to move to gender neutral caps and gowns” a few years ago. She felt as though this move supported gender equality and eased any discomfort for students who may or may not publicly identify with one gender. Escobar added that “returning back to blue and white gowns, in my opinion, is a step backwards on how society is moving forward on issues such as these.” On April 19, administration announced its decision to keep all the gowns uniform, continuing with a solid blue graduating class.

In order to get an opinion from the entire Class of 2017, Assistant Principal Katie Blore walked around with a survey at lunch in early March. This survey gave three options to students: everyone wears blue, everyone wears white, or students could pick their color individually, regardless of gender or sexual orientation. Principal Chris Rau said in an interview that 20 students voted for wearing all blue, 40 students did not have an opinion, and between 130 and 140 students voted to pick their own color. In addition, he stated, “we do not want to put anyone in a box that they don’t want to be in.” The administration said its decision sought to be conscious of everyone’s feelings.