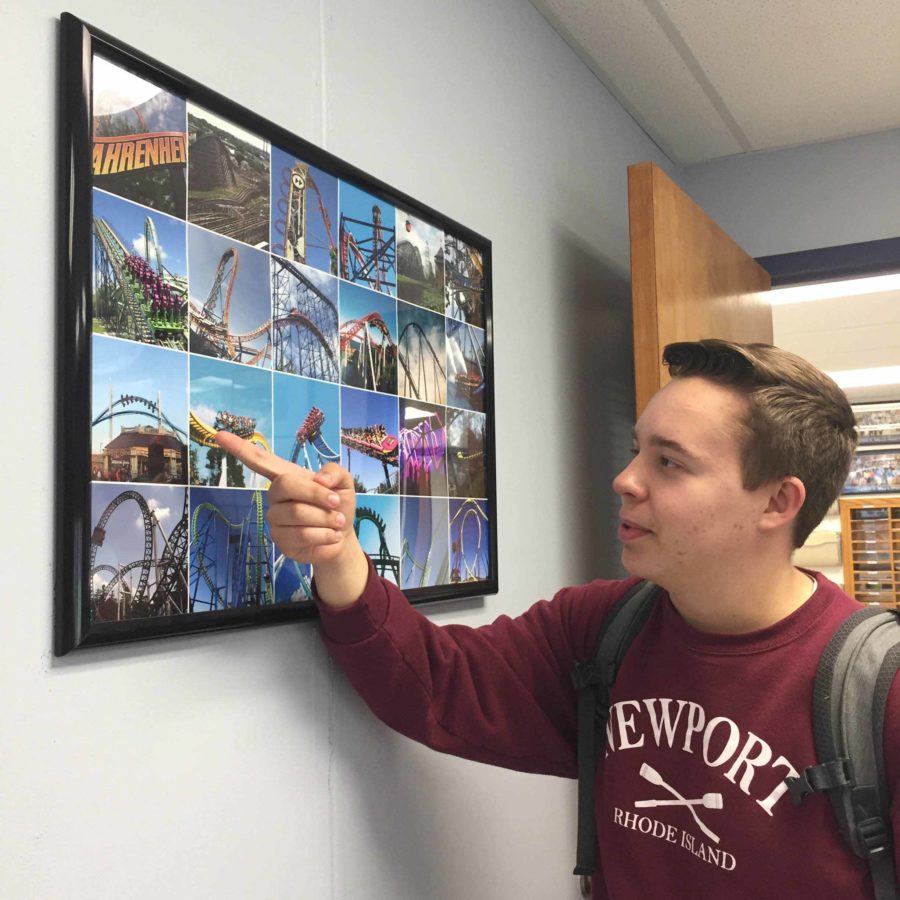 Senior Charlie Rau, 18, discusses roller coasters in front of a picture collage of his favorite rides.

As a 17-year-old Charlie Rau walks onto the stage for his final bow as Mr. Mushnik in “Little Shop of Horrors,” his mind is elsewhere. Taking center stage, he bends at the waist. The audience almost levitates to a standing ovation. He steps back into the line of cast members on stage, and they take their final bow. The lights dim and they exit the stage, but still his heart is beating quickly. No, he wasn’t thinking about his next line, or if he set his props stage left, or his next quick change. The show was over. He thoughts, his excitement, his anticipation were focused on his next family vacation to Six Flags.

Lewis S. Mills senior Charlie Rau is many things: an enterprising actor, singer, and dancer at the Warner Theatre, a National Foreign Language Honors Society Scholar, an honors student and caring brother. What most people don’t know is that Charlie also has a secret passion. He loves roller coasters. At four years old, he rode his first roller coaster. From that day on, he was hooked.

“I believe it was the Polar Coaster at Story Land in New Hampshire,” said Charlie of his first roller coaster experience. “It wasn’t huge, just a little coaster, no inverts or anything. The track was blue and the front car was a walrus with a nightcap. At one point the Polar Coaster goes through a tunnel, and when it happened, it had to be the most thrilling thing I had ever experienced.”

“We have always loved bringing the kids to amusement parks,” said his father and Lewis S. Mills Principal Chris Rau. As a child, Mr. Rau also enjoyed going to amusement parks, much the same as Charlie. “I remember when Six Flags New England used to be called Riverside. I went there a lot as a kid. They had a coaster called ‘The Black Widow’ which was one loop. At the time it was a huge deal.”

Now as a father, Mr. Rau has passed on to Charlie the same joyful experiences he had as a child. Since their first amusement park trip to Story Land, the Raus have continued to visit theme parks on vacation.

“From Disney, to Universal Studios, to the many, many parks around the U.S, Canada, and Austria that we have visited as a family, it has been part of almost every vacation we have taken over the last 12 to 15 years,” said Mr. Rau.

“Our favorites are Superman up at Six Flags, Boulder Dash at Lake Compounce and all the coasters at Cedar Point out in Ohio,” Mr. Rau said. With regard to Cedar Point, he emphasized: “That is truly an amazing park.”

But Charlie’s passion doesn’t just stop at being a hobby. He plans to channel his love of roller coasters into his future career. Next year, he will attend Rensselaer Polytechnic Institute in Troy, N.Y. to study architecture, and hopes to use his degree for theme park design.

“I just really like theme parks, because it’s another type of artistic medium used to tell stories and entertain guests,” said the younger Rau. “I love the design and thought that goes into creating that experience for not just the rider, but the visitor to any park. And, of course, the ride experience itself is pretty awesome. I love going to parks and going on roller coasters because I know so much more about them than everyone else, so I guess I get more out of it. My respect for the craft inspired me to want to make it into a career.”

At the moment, Charlie doesn’t know much about the specific engineering practices that go into building a roller coaster, but from what he understands, it’s extremely complicated and difficult, requiring a vast knowledge of physics and building mechanics.

“That,” he said, “is why I’m aiming for more of the park design path.”

His favorite tidbit: “Fun fact: we roller coaster nerds call regular people the GP or General Public, the people who ask the really stupid questions like, ‘does it fly off the track.’”

For the time being, Charlie will be enjoying roller coasters and their respective parks as a knowledgeable observer. But keep an eye out for any parks opening up 10 years down the road because we, the general public, might soon be enjoying coasters, attractions and architecture designed by an enthusiastic Lewis Mills student.