With a championship on the line, LAX girls give their all 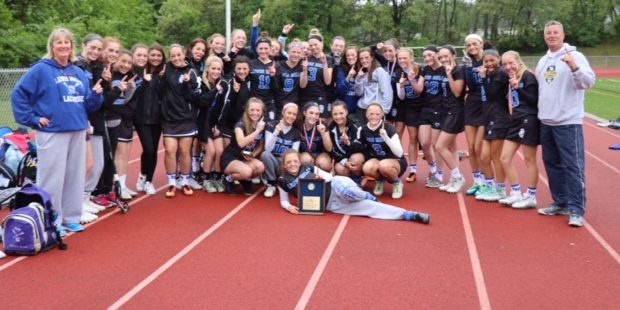 The girls lacrosse team clinched its latest championship this season in a nail-biter.

In the hours before sunrise on a rainy spring day, Kathleen Keegan packs her lunch for the school day ahead. Her mother makes breakfast, her siblings lay asleep in their rooms as she and 31 other girls prepare for the day ahead.

It’s Thursday, a day 4 at Lewis Mills High School, which means senior Elena Escobar, one of the other 31 girls, gets to sleep in first block.

With only weeks remaining in the school year, Rachel Hedden sits through one of her final lectures as a Lewis Mills senior in her civics class – staring at the clock, waiting for the period to expire.

These 32 girls all have one thing in common: at 1:45 p.m. they will all get on a bus and forget about school, friends, and weekend plans. These girls are on a mission.

Although those may be just four numbers to most, to these thirty-two girls those four numbers, those two scores, two losses, are a challenge. To the Lewis Mills Girls Lacrosse Team, those two defeats from Housatonic Valley Regional High School are invitations to win their sixth conference championship in a row.

It’s 2:00 p.m. There isn’t much talking on the bus, currently on its way to John J. Mills Field in Watertown, the host site where the girls have hoisted the championship plaque five times before. Despite having the past on their side, each and every girl understands the difference this year.

Never before have the Spartans lost both of their regular season games to Housatonic, the team they ultimately play every year for the WCLC Championship. Today is theirs to lose and Housatonic’s to win.

“We’re going to win, no doubt,” says Dee Stephan, Lewis Mills Girls Lacrosse Head Coach. Despite their coach’s confidence, the sentiment isn’t the same from the girls who must go out and execute today.

There are 3 minutes until the game starts. Captains have met, sides have been picked, sticks have been checked, and the only thing left standing between these girls and game time is the National Anthem. The tension on the field is almost visible as the old recording of the Star Spangled Banner crackles through through the speakers placed at the top of the bleachers. As the song winds down into its final verse, hoots and hollers come from a few of the more rowdy crowd members. The yelling crescendos to the end of the song as the players then jog to their places on the field, ready to begin either a great memory, or a long forgotten defeat.

The whistle blows, the ball is up in the air, and for a moment it seems to hang in slow motion as the girls begin their 50-minute journey that the past 50 days of hard work and dedication have all gone into.

Captain Rachel Hedden snatches the first draw out of the air and just like that time resumes to the fast pace that every athlete, doctor, anxious mother know too well. Hedden cuts down the field, weaves through a few defenders, by a few teammates and takes the first shot of the game. A whistle blows, the referee’s hands raise, just like that the score is 1-0. A sigh of relief comes from the Mills’ parents.

Play resumes, and almost as if all 22 players on the field were in on some theatrical performance, the same exact thing happens.

3-0. This time junior attack Wicctoria Galicka finds the back of the net.

4-0. Could be the game Mills was looking for? It appears as though this is going to be a complete and total domination of the other team, as if the girls have no doubt in their minds that they were going to win. Chatter among parents on the sideline begins to pick up. With still 19:47 to go in the first half, everyone settles into a more relaxed state of mind. Almost on cue a Housatonic player drives to the net and scores.

“WHERE WAS HER HELP!?!?” shouts Coach Stephan from the sideline. The Lewis Mills defense comes together on the field to discuss as Housatonic cheers and resets themselves on the field. As the Spartans set back up from the draw a “Let’s go Mills!” chant can be heard from Spartans’ Boys Lacrosse Team, which has just arrived to cheer on the lady Spartans.

Unfortunately, the defensive meeting and sideline cheer aren’t enough. Housatonic wins the draw and brings the ball into Mills’ territory. A pass to the middle of the field is dropped and screams erupt from the bench in congratulations but is cut off by the shrill sound of the referee’s whistle. One of the lady Spartans has committed a foul and Housatonic gets the ball back…. And score.

To this point in the game, whichever team has won the initial draw has gone on to score a goal, it becomes very clear how important these draws are. Luckily for Mills, sophomore Emma Gentile has been winning a majority to this point of the game. She loses one and Housy brings the ball down, eventually scoring the ball.

4-4. The teams are now tied in goals and draws won. As players reset on the field, it is very clear who has the game’s momentum, although none of the Mills parents will admit it. Mills wins a draw and retakes the lead, only to be matched by Housatonic. 5-5. This back and forth happens several times, 6-5. 6-6. 7-6. 7-7. 8-7. Halftime.

For 10 minutes each team sits in a corner of the field, discussing, planning, strategizing on how they could get an edge. Despite the lack of noise, it’s easy to see the energy radiating from Stephan as she commands the girls like a battle general.  For the spectators on the sidelines 10 minutes is an eternity; for the girls playing it goes by in the blink of an eye.

The whistle screams. And just like that, play resumes. Senior Rachel Hedden scoops up a ground ball and just as if the crowd was watching a broken tape of the beginning of the game, she drives like a cheetah on its prey to the net, shoots, and the bench erupts.

“Give me an R! Give me an A!…. What does that spell? Rachel!” 9-7. The girls on the field can see it already, the plaque, the post-win pictures, the bus ride home filled with music and laughter. They get too comfortable with 23:05 left before any of that. Housatonic wins a draw, and ultimately scores a goal. 9-8. Again. 9-9. Again. 10-9. Again. Housatonic now not only has its first lead of the game, it’s by 2. 11-9. Mills needs to score to stay in it.

A rallying cry is heard from the sideline and the girls reset. The whistle blows, the ball is up and the girls know what to do. Emma Gentile wins the draw, passes it to Rachel Hedden, who draws a defender and dumps the balls to Wictoria Galecka, who shoots and scores. 11-10. with 10:53 to go it’s quite the game.

2:34 to go and Housatonic controls the draw again. Play is stopped as senior Elena Escobar commits a foul, and must reset four meters behind the Housatonic player with the ball. The crowd holds its breath as the piercing sound of the whistle resumes play. Although the clock begins to wind, the Housatonic player with the ball stands like a deer in headlights. Escobar, the stalking wolf, lunges from behind to check the ball out of her stick, this time without a foul. Gentile scoops the ball and takes off toward the Housatonic zone. The waiting game has begun.

2:00 to go and Hedden has the ball in the top right corner of the zone. 1:30 and Gentile has it in the bottom right. 60 seconds and Kendall Butler has it at the top left of the field. 30 and Hedden cuts below the goal line with the ball to avoid a defender. 5 to go and Galicka is streaking down the field screaming with the ball.

It’s over. It’s finished. With girls crying tears of joy and of grief it’s all over. The Lewis Mills Spartans are your 2017 Western Connecticut Lacrosse Conference Champions.