Men of Mills compete for title 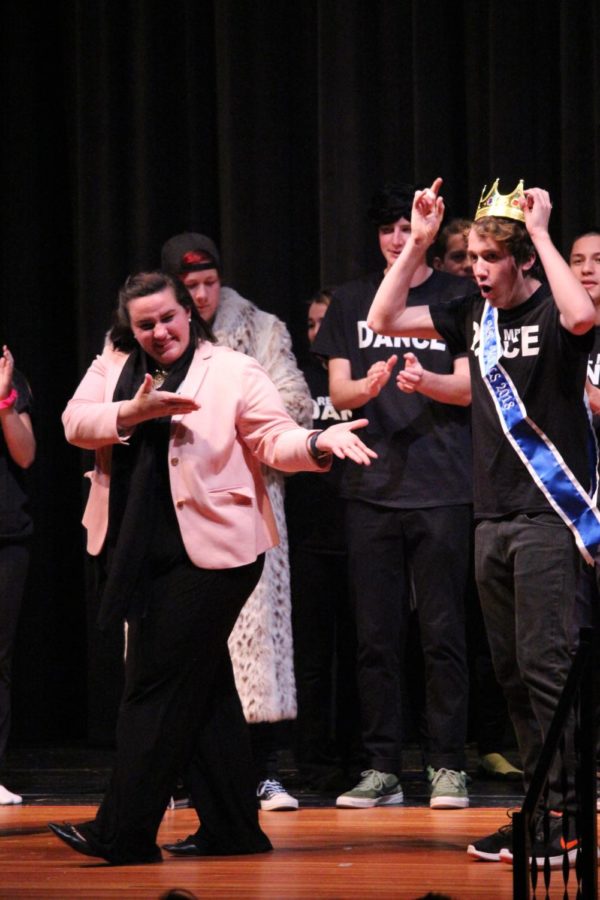 Senior Steve Wyzykowski reacts as he is crowned Mr. Mills 2017.

Backstage, the boys hurriedly ran through skits and routines with their escorts in attempts to reach perfection.

“My competition is average at best,” remarked Tommy Langer.

“It was tough. I’ve been told not to be nervous, but I very much am,” added Griffin Perrault– and the curtain went up.

Imagine 11 young men on stage in front of their entire school, the faculty, parents and administration, each wearing black t-shirts and black pants on this early December night. As the music commenced the lights illuminated, signaling contestants to begin the “Hot Stuff Dance,” and throwing the show into gear with exaggerated hip swivels and mighty push-ups.

Among those 11 seniors, Steve Wyzykowski would be the most successful of the night’s competition, ultimately crowned “Mr. Mills.”

Leaving the stage with a crown upon his head, a smile beaming on his face, and a sash draped across his chest,  winner Wyzykowski said, “I didn’t think I would win to be honest, but I’m really happy with the outcome. I couldn’t have won possibly without the help of my escorts, so I owe the world to them.”

The trio made a statement from the first moments of competition, as Alycia Fournier and Carly Kucia guided Wyzykowski through the darkened auditorium to the glowing stage – ultimately tearing away their sweats to reveal the name “Wyz” across the backs of their shorts.

He continued to present the audience with round after round of crown-winning entertainment. Wyzkowski’s perfectly tuned note on his clarinet demonstrated his hard work and determination during band — a class which receives little credit by many peers —  during the “Favorite Class” section of the show. And his impressive, yet hilarious, pacer test mimicking the gym class staple in the “Untalent” portion of the competition won over the judges and the crowd. Consistently, Wyzykowski was pushed to go father, and farther, into the pacer test by his “coaches,” also known as his two escorts. Eventually, he was pushed to his limits and collapsed dramatically, yet comically onstage, out of breath and needing to be dragged off. This year’s judging panel consisted of various faculty and staff including, Madame Faga, Mr.Trahan, Mr. Vitali, Ms. Howe, and Mrs. Frasco.

Perrault, crowned runner up, blindfolded himself and attempted knife throwing with plastic and foam knives, aimed toward escort Kathleen Keegan. Meanwhile Tim Mazerolle sang an original song called “Tribute to Gucci Gang,” which had the audience unable to stop laughing and clapping, as they expected to hear a fairly well written song. Instead, Mazerolle strummed chords on his guitar and replaced the lyrics with grunts and hums.

Second runner up was awarded to Garrett Copeland. Copeland dominated the stage dressed as President Trump as he tossed roll after role of paper towels towards a basketball hoop with high hopes of scoring some points. All but two never made it in. Copeland also marched the stage in costume as a dinosaur, and repeatedly made jokes about his Subaru, which everyone now knows, likes to “blow up” as he put it.

Michio Agresta, crowned Mr. Congeniality, partnered with Jackson Lord during the “Untalent” portion of the show to present a magic bit. Within their segment Agresta and Lord “swapped hair,” as Agresta magically shaved his head after 12 magic claps from the audience– possibly one of the most memorable events of the night.

“I don’t regret shaving my head because it’ll eventually grow back,” said Agresta, his dark hair all zigzags and unkempt lines. “It was cool having everyone in the auditorium watch me on stage.”

This unconventional, once-a-year, school-wide program is highly anticipated by students and the community, and always ends up a hit. In his new role, Wyzykowski will contribute by engaging in small activities in the classroom and around town. He immediately upheld his new Mr. Mills duties by participating in the school’s yearly toy drive, and singing about it over the announcements, encouraging everyone to donate toys. In return for his hard work and embarrassment on stage, Wyzkowski scored prom tickets and a tuxedo discount. We can only expect him to wear that suit as well as he’s already worn his title and sash as the school’s 17th Mr. Mills.