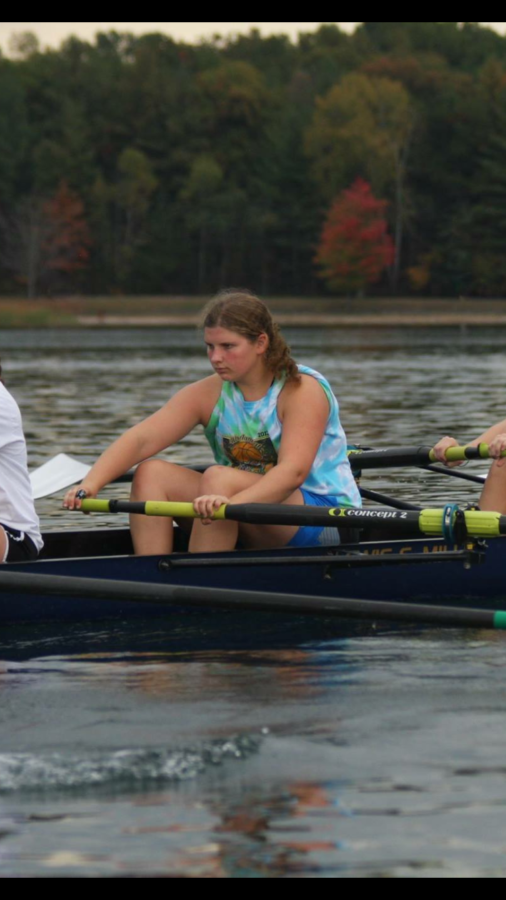 Senior rower Gabby Bagdonas recently signed on to become a member of the Division 1 crew team at Rutgers University in New Jersey.

On Nov. 8, a life-changing event rocked the world of high school senior Gabby Bagdonas. Early that afternoon, the young crew racer signed the paperwork to confirm her admission to Rutgers University in New Jersey.

The past few weeks had been filled with the stress of the college decision – both Rutgers and Gonzaga universities attempted to lure Bagdonas, a powerful rower, with promises of scholarships to the Division I schools. She made lists of pros and cons for each school, borrowing advice from friends and weighing each choice with notes on a classroom white board during study hall. Both schools pressed for a quick answer, giving her a week’s notice before they required responses about her decision.

“I chose Rutgers because it has better educational opportunities,” Bagdonas said. “I was clearly torn… but I felt safer knowing that I would be closer to home.”

One of the negatives about Gonzaga, located in Washington state, had been its distance.

Both schools were interested in her rowing ability, as she is a strong and passionate member of the Lewis Mills Crew Team, and has been for her entire high school career.

Her coaches describe her as optimistic, but her friendly demeanor does not interfere with her competitiveness. At every meet and every competition, Bagdonas encourages her teammates to do better while always doing her best. In the eyes of her teammates, she is one of the best rowers they have, not only because of her incredible skills, but because of her kindness and the heart she exudes while she executes those skills.

When she is not in the boat showcasing powerful rowing moves, Bagdonas studies and moves through high school just like any normal 17 year old. She loves learning, and she is almost always smiling and laughing. Bagdonas could be qualified by many as the kindest person in the room. She knows how to uplift others even when she’s not feeling her best, and she says “hi” to everyone she even vaguely knows in the hallways.

Bagdonas, a consistently diligent student, received a scholarship for her athletic ability. She plans to follow her crew path through college, studying criminal justice along the way.

“Helping people has always been something I’m passionate about,” she said.

Bagdonas noted her family’s support of her decision as important.

“I’m not sure what job she’ll want, but most likely something that deals with helping people,” said her father, Algis Bagdonas. “I think she’ll use her education to help her succeed in helping others.”

Bagdonas’ mother believes that her daughter will yield a powerful influence.

“All I know is that she will make an impact on everyone,” said Aelita Bagdonas. “I hope that after her education, she is happy and proud of herself. I want her to be confident in who she is.”

Bagdonas’ friends are also incredibly proud of her decision. A flood of almost 100 comments on Instagram of “yay Gabby!” and “we’re so proud of you” affirmed for the senior that she made the right decision. One of her closer friends, Alyssa Arnista, also a senior at Lewis Mills, predicted that Bagdonas has a bright future at Rutgers.

“She will fit in there, especially doing what she loves. Crew is her passion and she’ll be doing it with people who feel the same way,” said Arnista,  adding that while Bagdonas chose Rutgers for its education opportunities, she is pleased to have her friend remaining closer to home.

Bagdonas will begin her schooling at Rutgers in the fall, but she hopes that college will not be it for her.  She wants to continue learning in other, unconventional ways.

“It would be a dream of mine to travel the world and experience different cultures, to learn from people that might be experiencing a struggle I’m foreign to. I want to learn,” said Bagdonas.