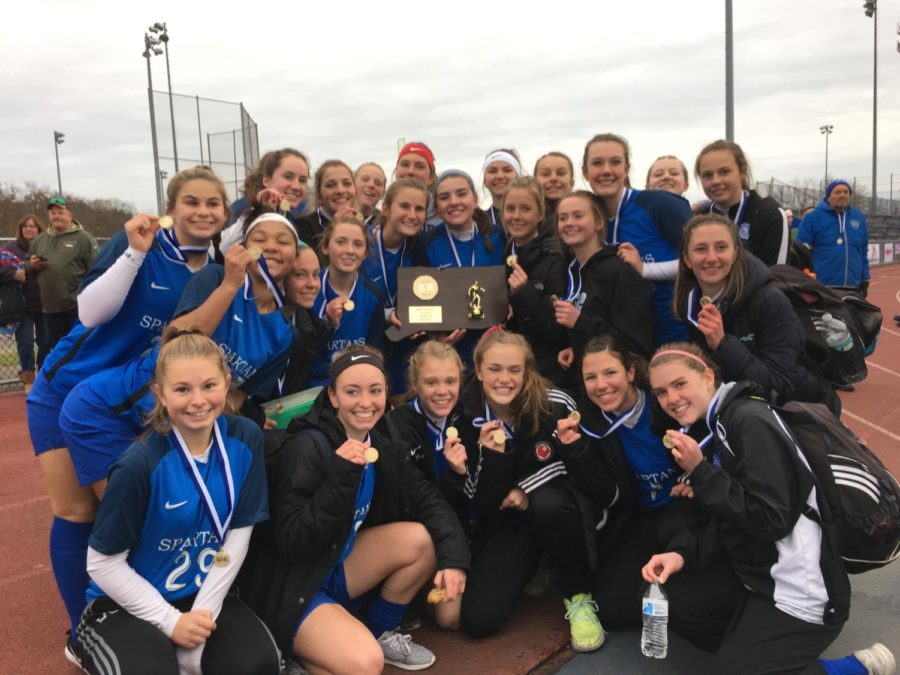 It started with an undefeated regular season. The Lady Spartans cruised through the varsity soccer season undefeated, making their way to the state finals. Never before had LSM girls soccer won the state championship. But this year, Mills made history and went home as champions, marking the second time in two years a Mills soccer team has clenched a state title. In 2017, the LSM boys took home the title. This year, it was the girls’ turn.

During the championship game, Plainfield scored the first goal. Later, senior Jazzy Sztyler-Magee scored, lodging the two teams in a tie  for the remaining 60 or so minutes. Overtime. It was very intense and stressful for the Lady Spartans. As the girls were scrambling around the field to find ways to score, it was still tied until the very last few minutes of the game.

Senior Sztyler-Magee said: “It was so nerve racking making it so far in the championship I’m so lucky to be here with my girls and to have made it so far. Especially with the girls I grew up with and for my senior year.”

Her teammate Mia Bylykbashi was saving shots left and right making Plainfield angry, and causing them to work harder. Although the lady Spartans were tired and cold, they pushed themselves even harder and in the last few minutes of the game against Plainfield. Sophomore Grace Buchanan flicked the ball into the back of the net, leading to a 2-1 overtime victory and sealing the Lewis S. Mills Lady Spartans as 2018 Soccer State Champions. The girls, still today, are celebrating their win. On Thursday November 29, 2018, the girls gathered together with the rest of Mills for a bon fire to celebrate the big win. Not only did this event occur, but the lady Spartans go an escort after the game. Their bus was decorated with streamers and posters and following in front and behind them were Burlington police officers. As they rolled into Burlington, families and friends lined the streets cheering and clapping on our 2018 soccer state champions.