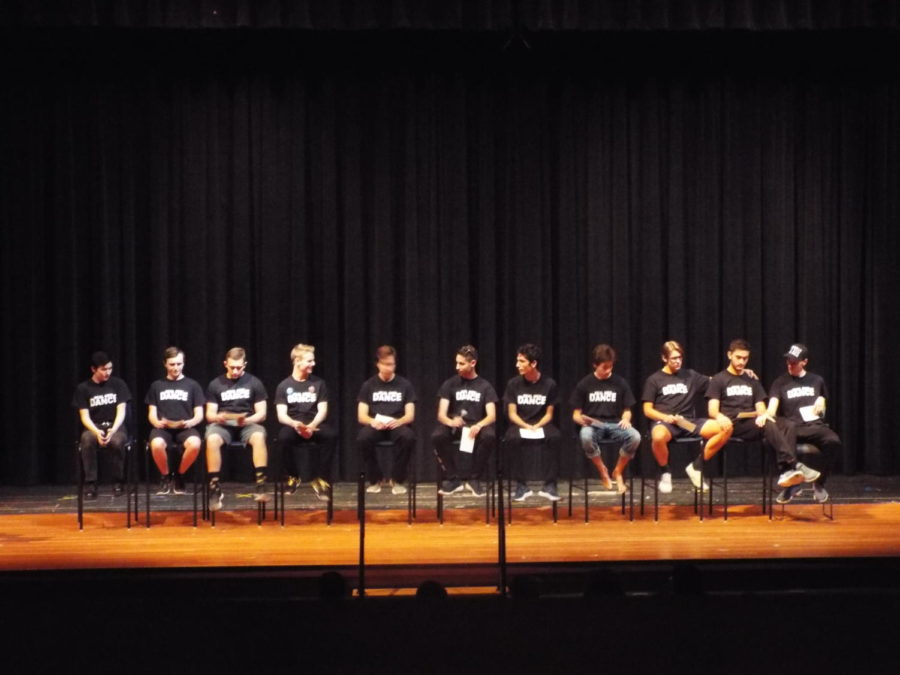 “Bonjour, je m’appelle Madame Faga,” said the 6’2”, blonde, unusually orange, football player in the three-sizes-too-small French maid’s costume. It’s hard to believe that 11 senior men put themselves in the humiliating position to win the 18th annual title of Mr. Mills, but the years long tradition demands acts that push the envelope and evoke the crowd into a fit of laughter.

From 7 a.m. to 7:20 am Monday through Friday for a month-and-a-half leading up to the annual show, each competitor and his escorts vigorously practiced their best dance moves in preparation for the big night. On the night of the show, a line stretched outside of the auditorium lobby as family and friends impatiently awaited the event of the year.

Hosted by senior Jaden Adams and Dean of Students Tug Drysdale, the night commenced with the one-of-a-kind Hot Stuff Dance. Right off the bat, men with talent could be picked out of the crowd, while others lacked the ability to find the beat— filling the air with laughter.

“Leading up to the show has been a blast,” said Grayson Laberge, the contestant who donned the French maid ensemble. “After watching the rehearsal we had earlier this week, I can say that there are many funny acts.” Laberge even mentioned that he felt that “truthfully, anyone can win it this Saturday.” This proved to be true. There were an array of acts ranging from those that pushed the envelope to others more tame and family friendly.

“There was some parenting that had to be done after that show,” joked Mr. Bruce Mullen whose children came with him that evening to enjoy the show. In comparison to last year’s Miss America mockery, this year truly allowed many dicey jokes.

Throughout the show, fan favorites were titled to Dylan Hallet, Nathan King, James Gorski, Nick Benvenuto, and Grayson LaBerge. Favorite acts included Hallet’s entertaining performance during the untalented portion of the show, where a game of telephone was played, and things got a little handsy,” and Gorski singing a duet to Ed Sheeran’s “thinking out loud” with Jack Foley in full costume, wearing a long wig, and petite dress.

“The Mr. Mills experience is truly something that will stick with me long after I’ve graduated,” said Benvenuto. He would like to thank his “two lovely escorts Kaleigh and Emily. They have literally always been by my side in preparation for this show and I know they’ll still be there long after it.”

Benvenuto kept his acts family friendly, and still managed to enthrall the crowd. Whether it was his saxophone jazz battle with Connor Rickerman, or his Dirty Dancing movie scene with Jack Gacek. which ended with him being thrown over Gacek’s shoulder and laying on the floor motionless, it was a title truly well deserved.