A snuggle a day keeps the doctor away 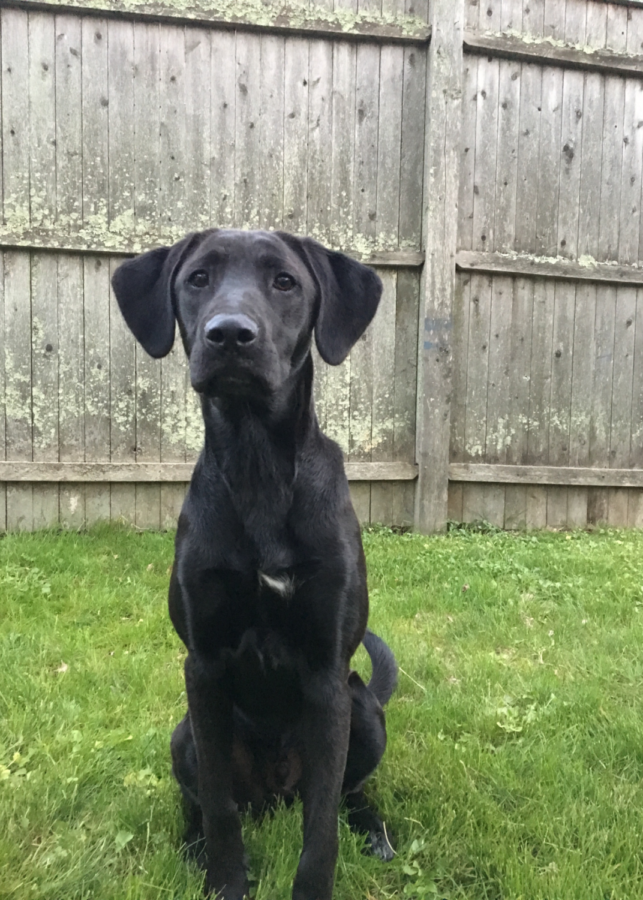 Rhody, a dog belonging to math teacher Jay Pelchar, has made appearances at Mills to offer "pet therapy" to students participating in a Grief Group.

Australian shepherd puppy, Apollo, trots into Apple Rehab, a short-term rehabilitation facility located in Plainville Conn., like he is walking onto the Met Gala red carpet. He drags his owner, Amanda Piccoli of Burlington, in through the front doors, pulling on the blue leash with all his might. His stub of a tail is violently wagging, and his blue eyes are dead focused on the elderly man sitting in his wheelchair, motioning him to come. Apollo sprints towards the man, and hops into his arms.

“Hello Mr. Apollo,” the man says to him, speaking in a baby voice.

He gently strokes Apollo’s white, gray and black fur, massaging behind his ears. While running his hand through Apollo’s coat, Apollo rolls onto his back, and moves his arms and legs out to the side. It is almost as if he was begging for a belly rub, which is what he quickly received.

After Apollo’s much-needed massage session, he jumps back onto his feet, and travels down the hall. Instantly, frowns turn to radiant smiles, and sad mumbles to jubilant yelps. At the end of the hallway, he turns into the rehab department, and greets Lessard, a patient who has been at Apple Rehab for the past month. Lessard is quietly sitting on a chair, hesitant to start his daily physical therapy because of knee pain.

“Lessard, we are going to try to walk today,” says Vanessa, a physical therapist at Apple.

Amanda quickly lets Apollo off the leash, and he sits at Lessard’s side, staring up at him. When Lessard attempts to take a step, Apollo follows. He mimics Lessard’s slow movements, carefully avoiding his feet.

At the end of his walk, Lessard feels stronger and proudly states, “Apollo makes the elderly work harder on their goals, so they can go home to see their own dogs.”

Vanessa does not only use Apollo for motivation with Lessard, she also uses him with many other patients.

“He is a great incentive for patients to come down to the gym, and a great reward for hard work in therapy,” she explains.

Before Apollo came to Apple rehab, she found it very difficult to encourage her patients. Every day, she would coerce them out of bed, because they did not want to get up. Now, seeing Apollo’s face often sets the patients’ moods for the day and encourages them to start their morning.

At Apple, Apollo is also used for stress relief. He gives patients endless kisses, love and attention, and sits patiently while they bend over to pet him. Petting Apollo is very therapeutic and relaxing and has multiple benefits such as lowering blood pressure and releasing relaxation hormones. Research has also found that 24 percent of people who visited a therapy dog were calmer and much more relaxed.

Lewis Mills High School guidance counselor Meridith Silver stated, “Therapy dogs, and dogs in general, are very calming and love you unconditionally, which helps with stress and anxiety.” She emphasizes that dogs are 100 % necessary in elderly homes and schools, which is why she would like to see a therapy dog at Lewis Mills.

Schools and rehab centers are very similar in that people are often stressed there. Patients and students are both pushed to their full potential and are expected to do stressful things, making the two places great environments for therapy dogs.

At Lewis Mills, a therapy dog named Rhody has already been brought in twice. One of the occasions was for a program called Grief Group. It was organized by Michelle McCard, a school psychologist, for children who have dealt with grief and loss. Rhody’s owner, math teacher Jay Pelchar, brings his dog to Grief Group to help the children.

When asked, Pelchar quickly answers with, “everybody smiles when they see a puppy.” He explains that when the children pet the dog they were at ease and everything else they were thinking about seemed to drift away.

Other schools have also brought in therapy dogs to help children with reading. Silver explains that her daughter struggles with anxiety and reading with the dog made her feel calm and peaceful. The dog will not judge if you mess up a word, or stumble on a sentence, which makes children want to read for longer periods of time.

In places like schools and rehab facilities, frequently brightens the mood. Seeing a dog’s fluffy face staring at you while walking through two doors, could make a dreaded experience instead something to look forward to. Students and patients might even look forward to that grueling physical therapist visit or the day of a test, aching to pet and love the dog. As Lessard said, “all places should have a mascot dog to motivate the people.”