The Spartan Scroll • May 22, 2019 • https://lsmspartanscroll.org/2739/student-life/bringing-the-lewis-mills-tech-crew-out-of-the-shadows/

Bringing the Lewis Mills Tech Crew Out of the Shadows

Behind every successful cast is a hard-working crew. 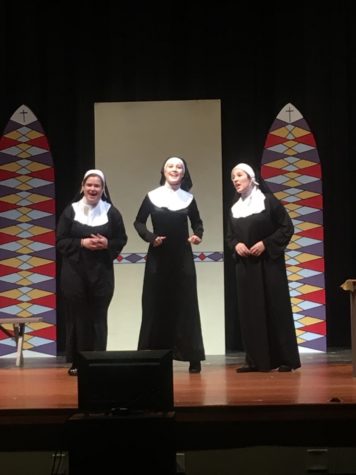 As the stage curtain rises, the audience can already see cast members in their positions. The play begins and, if all goes well, the cast will captivate the audience with fluent actions in sync with the orchestra’s music, almost as if the characters they’re playing are real. When each scene ends and the lights dim, people dressed in all black rush out and change the set, barely seen amid the darkness. Perhaps only then does the audience stop to think of the people literally and metaphorically behind the scenes—the tech crew.

By design, the tech crew isn’t readily acknowledged throughout most performances. Some credit is given to the group of twenty or so kids in the programs that are handed out prior to the play, and maybe they’ll be mentioned after the play, but other than that, they don’t receive much recognition. The small amount of acknowledgement they get isn’t reflective of the tech crew’s efforts in Lewis Mills’ most recent play, Sister Act.  Tech spent around 80 hours working on the set of Sister Act to get it ready in time for the show.

“This year we built tables, benches, the stained-glass windows,” said Mrs. Daniele, a special education support staff member who runs the tech crew.  She has been running tech for six years and, in addition to having developed an effective schedule to ensure everything is ready before the play, she also keeps an eye on the kids and teaches them to use the tools necessary to build a set.

“These kids, when they join, most of them don’t know how to use tools…within a few weeks of being a part of this, they’re taught how to use equipment we have, which is very important,” Daniele stated.  It’s crucial for the tech crew to learn how to use these tools as they build a lot of the set themselves, in this case the church benches, stained glass windows, and the jukebox to name a few items.

After the directors of the play have given a loose idea of what the set should look like, tech begins to meet for about four hours on Saturdays in late January.  Although everyone pitches in and helps wherever possible, the group usually breaks up into teams—the artist, the builders, and so forth, and get to work.

Around two-and-half weeks before the play, the tech crew begins to meet daily to finalize the props and get everything ready.  By “hell week,” which is the week right before the show when the entire club stays after school and practices up until 10 at night, they come together with the cast and orchestra to run through the play.

Mrs. Daniele believes that for all of the work they put in, the crew doesn’t get enough recognition, though she admits that the programs do allow tech to get noticed.

Tech themselves seem to have mixed opinions when it comes to the amount of acknowledgement they get. 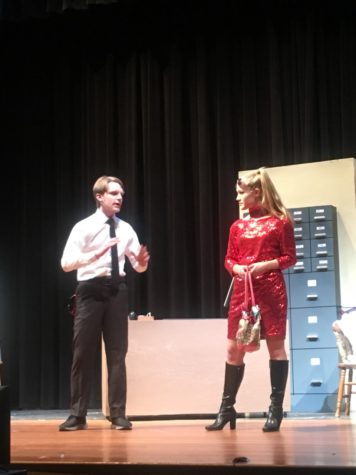 Alex Simmons and Marlie Vensel are two of those such people. As freshmen, they’re new to the tech crew and know that being behind the scenes is what they signed up for (when asked how she liked it, Alex replied, “Oh, it’s nice. It’s nice.”), but they both still feel that the crew doesn’t get enough acknowledgment from the audience, not for the amount of work they put in.

From constructing the set, to working out lighting, to even helping a cast member take off their nun habit in less than a minute to reveal the suit underneath, tech does it all. Not everyone realizes this, although some students know what tech does for a play.

“Definitely without them, [the cast] would just be dancing out there,” commented junior Jonna Colapietro. She and fellow junior Jen DiChiara were in the audience of the play and both agreed that it was an amazing experience.

The cast as well is very aware of how important the tech crew is. “I think they should’ve gotten way more [recognition],” stated Savannah Duursema, a freshman who played various roles in Sister Act such as a nun and a homeless person. “I thought they did an amazing job.”

These mixed opinions on the amount of recognition the tech crew gets raises interesting questions: Should the tech crew finally be brought out of the shadows and given the acknowledgement and praise many feel they deserve?  Or should they be left to themselves behind the stage curtain and continue to support each play from the shadows?