Cleanup in aisle 12? Marty the robot is on it

Stop & Shop stores take another step into the technological future 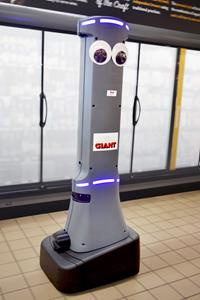 Many Stop & Shop stores have recently added Marty the Robot to their ranks, including one in New Britain and, soon, the Torrington store.

As you stroll into Stop & Shop, you are greeted by a large television that displays live surveillance of the entrance. You only have a few items on your shopping list. You are breezing through the store as a 6’ 3” robot with large googly eyes advances closer, and closer to you. Your phone begins to ring.

The Stop and Shop robot, also known as “Marty,” zips himself around the store with his very own robot responsibilities. Marty was created to lend a helping hand locating messes throughout the store. He looks for messes and alerts an employee if he finds one. Then it’s his job to keep customers away from the spill. The Stop and Shop Headquarters and engineers from Badger Technologies decided to launch this project, and customers began seeing these handy helpers in early 2019.

Although Marty is a new and interesting piece of technology, not all Stop and Shop employees fully support Marty and his arrival.

Michele Ciehoski is a cash office manager at Stop & Shop in New Britain, Connecticut. Ciehoski easily sees both positive and negative aspects of the store’s robot.

Having experience in the financial field, she stated that Marty is a “waste of money” and in the long run, Stop & Shop does not get the reliable piece of technology that they paid for. When asked how much the robot actually costs, Ciehoski answered, “Just know it was REALLY expensive.”

Conclusively, she was able to say the robot had more drawbacks than advantages. Some, like Michele Ciehoski believe that Stop & Shop paid way too much for a robot that “sometimes it doesn’t even work.”

On the other hand, Jennifer Antonelli, a manager of Stop & Shop in Torrington, believes increasing amounts of technology have overwhelmingly been a benefit to employees and customers alike, especially the latest appliances such as Marty, which will be entering the stores in the next few months.

Some of the more recent inventions she mentioned were the Self Check Out stations, the Scan-it machine, the “Delivision”, Peapod, and the latest machinery- frictionless pay. These all make our lives easier by doing some of the work for us. Some, like Frictionless Pay and Marty, take grocery shopping- and buying- to a whole new level.

With the latest frictionless pay, shoppers can purchase their items without even stopping at a register and the cost is automatically taken off their credit card.

Antonelli sees Marty as one of the most exciting additions to the supermarkets, mostly because he’s brand new and he catches everyone’s eye. If you haven’t seen this incredible invention yet, don’t worry! He’s being sent to stores all around the nation, one district at a time.

Some companies may be hesitant to committing to the use of many computers, but Antonelli’s store relies on this heavily.

She stated, “In order to stay in business, our stores have to embrace technology that allows us to work faster, safer, and more effectively for our customers.”

Logically speaking, if the store is structured with efficient technological helpers, human employees have increased time with costumers.

In everyday life, it is more than just the robot who makes life easier for us. It’s the computer, the dishwasher, the television. We are always around some type of technology, even outside the supermarket.

Technology is all around us, and as great as it is, we are beginning to rely on it.

Sometimes we do not notice our reliance.

Trinity Moulton, a student at Lewis S. Mills High School, is one of the few people in our generation who is passionate about not owning a cell phone.

She believes that the best experiences in life are something other than what YouTube or Google can provide for us. She loves going to dance class, running Spartan races, and spending quality time, face to face, with her friends and family.

In fact, Moulton cherishes her time away from screens, stating she feels more productive and creative when unplugged.

t1“I’m living life the way it’s meant to be lived,” she states, when questioned about not wanting her own cellular device.

Some students don’t realize how much screen time they have, and how their screen time adds up to a lifestyle of always needing technology.

“We are already surrounded by more technology than we realize,” Moulton adds, “and even though it’s very helpful, it could also have its disadvantages.”

Compared to our younger generation, many older Americans could never imagine themselves walking down the Stop and Shop isles, with a massive machine following them.

Taking a sharp right turn, you end up walking down the bread isle. Being your clumsy self, you knock over the glass tomato sauce container that someone had left dangling on the edge of the shelf. Out of the blue, the 6’ 3” robot with large googly eyes advances closer, and closer to you. Only this time, he’s telling you you’ve made an enormous mess.