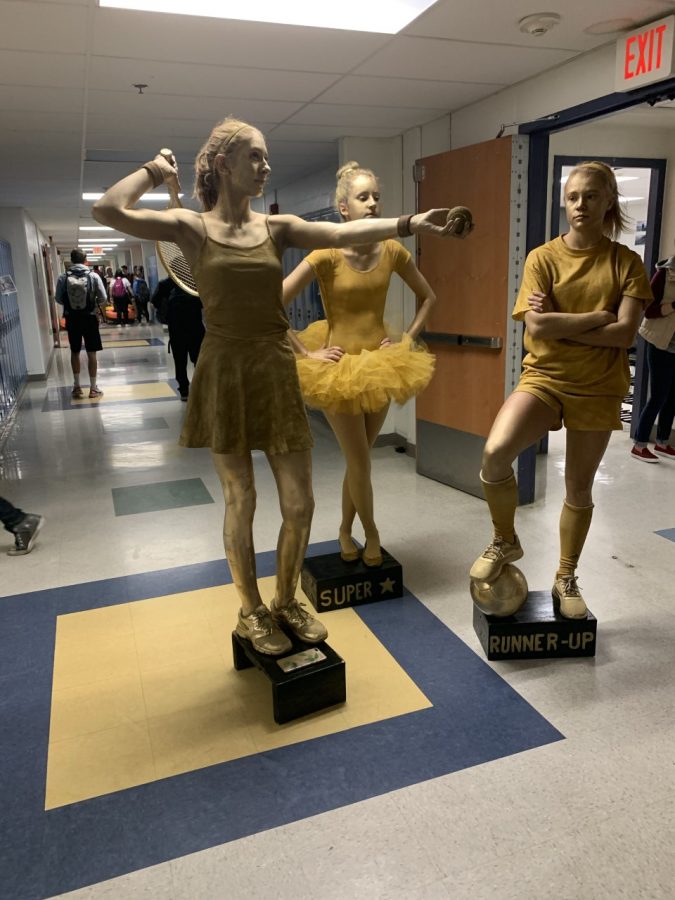 It’s a cloudy October day, and gusty winds send leaves fluttering through the air. The aura of the outdoors radiates a chilly feeling and hints at the coming winter. But inside the warm walls of Lewis Mills High School, students watch in shock and amazement as a bright green alien is dragged through the halls by members of the FBI.

Upstairs in the math wing, as students rush through the halls, traffic suddenly halts, and blaring Queen music echoes down the hallway from the intersection ahead. In the middle of the hall, a group of golden girls – gleaming from head to toe – have taken up position at the crossroads, striking various poses as different sports- from a baseball player up to bat or a boxer in fighting position, complete with “We Are the Champions” playing for good measure.

These aren’t the only case of creativity and wackiness present throughout Lewis Mills on this celebrated day. Senior Halloween is a Lewis Mills tradition where the seniors- and only the seniors – get to wear costumes for Halloween, making it another priviledge of being a senior in addition to being able to use the prized courtyard. As such, it is very different than the Halloween traditions students may be accustomed to from elementary or middle school.

However, many people embody group costumes and not just wear them- but act them out. In fact, Seniors have permission to do stuff in their costumes they would not be able to usually do on a daily basis- such as blocking traffic in a hallway intersection with various props, coming into classrooms, or just making a fun racket as they try to fit into the character of who they are dressing up as.

Many other members of the Class of 2020 came up with fun ideas for both solo and group costumes. A group of hooded monks shuffling down the hallway with eerie music in the background was a show-stealer, and many times did they come into classrooms and do something like sit in a circle and chant. There were old ladies with walkers, a couple of Purge survivors, and who could forget the flotilla of rafting thrill-junkies that rowed themselves down the hall, decked out in water-faring gear?

After a full day of seasonal spooky fun, the P.A. system aired to announce the winners of the 2019 Senior Halloween group costume contest. Many bright and creative costumes were nominated for different categories, but overall the best group costume award was given to the mysterious chanting monks. The group in question was very excited about their victory after a full day of traversing the halls and sitting ominously in circles to the awe of passerby. It was clear they deserved this award from the amount of effort that was put in and how well they fit into character.

However, the monks were far from the only ones that had excellent costumes. Every senior- no matter which one- put time and effort into making their plans for the day come true, and the rest of the school enjoyed the creativity the class of 2020 brought to this year’s senior Halloween. Whatever costumed people set foot in the school on Halloween in the future, we all know that the senior Halloweens yet to come will- like 2019’s- continue to be excellent and grow upon an exciting Lewis Mills Halloween tradition.