The Spartan Scroll • May 8, 2020 • https://lsmspartanscroll.org/2977/news/freshman-actor-takes-center-stage/ 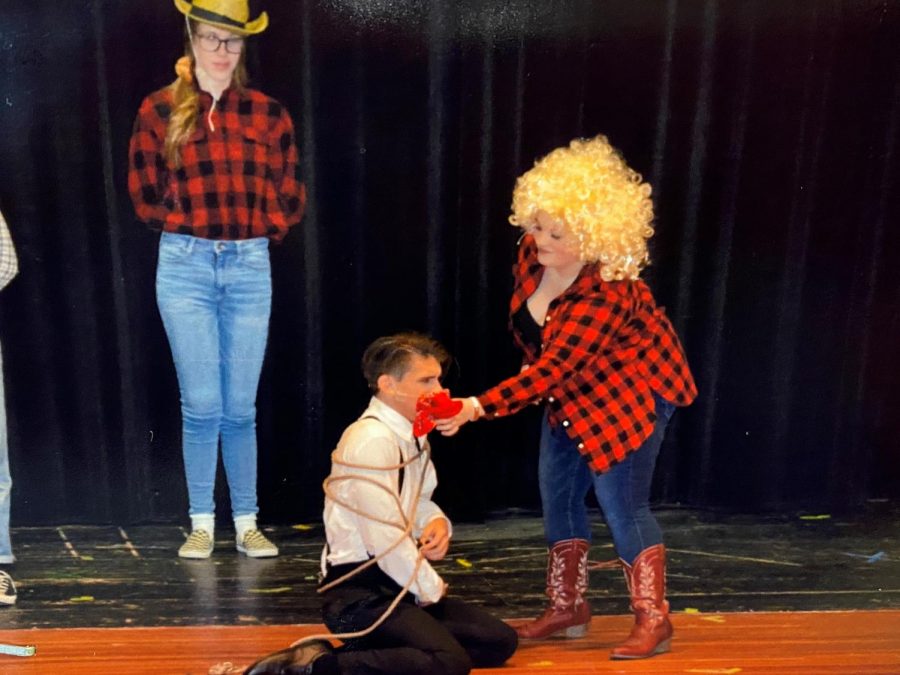 Freshman Ian Markowich recently acted in one of the lead roles in the school musical "9 to 5."

The lights turned on.

Out stepped three seniors… and a freshman?

The last weekend in February, Lewis Mills High School witnessed a freshman flawlessly perform a lead role in its school play, “Nine to Five.” A very outspoken student, Ian Markowich, 15, took the lead, antagonistic role in the performance, and audience members just about unanimously concurred that he nailed it. It just goes to show how one should never assume someone’s ability based off their age, even as many high schools’ starring roles are often reserved for upperclassmen.

Ian lives in Burlington, with his mom, dad, two brothers, and four cats. He goes to school every day at Mills and goes to his classes, just like every other student, making his fellow classmates laugh all the way.

“Ian is very good at lightening the mood,” said Olivia Gumula, a childhood friend of Ian’s.

No one expected this normal student to become such an incredible actor. Always known for his tremendous speed and athleticism, now many peers and teachers have witnessed Ian’s hidden knack for acting, singing, and dancing, as well.

His light-hearted personality helped him during the rehearsal process for the play. Ian did not just improve his performance, but he improved the performance of everyone around him, according to cast and crew members. This is something often expected of a senior with a lead role, not a freshman. Ian also helped the cast relieve some tension and stress when he would crack a joke, boom out his contagious laughter, or even just smile at his fellow stars in the making.

“Ian created the perfect comfortable and positive environment for the performance,” according to crew member and fellow freshman Paige Zimmerman.

Ian’s well-known extroversion contributed to his success. Extroverts draw energy and positivity from being surrounded by other people, a sort of personality perfect for theater. Ian was able to keep his already positive personality motivated when he was surrounded by his classmates.

“Ian has always been very outgoing,” according to Olivia. “He’s always loved surrounding himself with other people.”

During the musical about three working women’s struggles with an awful, chauvinist boss, one didn’t have to look at Ian’s attire – dark corduroy slacks with suspenders, black business shoes, and a white button-down shirt – to know which role he had. He created the perfect embodiment of the derogatory, sexist character Franklin Hart just through his gestures and expressions. Whenever he lifted his brows when he talked to colleagues, or emphasized an exhale, it made audience members think he was the most self-centered person ever. Even Ian’s singing had a hint of arrogance. The clothes were just an addition.

“The audience was a lot louder when he came out,” according to Kaelyn McFadden, another classmate of Ian’s.

After the performance, a crowd gathered near the backstage area, waiting for the exhilierated cast members to strut out, especially the young star Ian. People surged around him, shoving gifts and flowers towards him.

“It was like he was a celebrity,” said Olivia.

Many agreed that Ian was a main reason they went to and enjoyed the performance.

“Ian was the star of the show,” classmate Gabriella Zeller said. “He was the main reason it was so successful.”

However, Ian did not take part in the play for the fame. He simply wanted to follow his desires.

“I’ve always loved music. I listen to it every day, and I sing and hum no matter who’s listening,” said Ian.

Ian found his inspiration from the music he listens to constantly and after he saw the Broadway show, “Dear Evan Hansen.” Since the main character in the show is normal a high school boy, it was very relatable for Ian.

“During the show, I thought to myself, ‘people do this for a living,’ and I immediately took a liking to it,” said Ian.

He said that preparing for the play was some of the most fun he has ever had. Initially, it was very

stressful, due to having a lead role, and everyone’s high expectations for him. But, due to the great atmosphere he and his fellow actors helped create, he felt at home by the end of the first rehearsal.

Ian made sure to break down the performance during rehearsal and take it “scene by scene” and “step by step” so as to not overwhelm himself.

When they first started rehearsing, Ian spent two-to-three hours a day practicing his parts, whether it be at home or at school with the rest of the cast. By the two-week mark before the performance, Ian was spending seven to 10 hours a day doing what he loved. Even after doing the same things over and over, Ian still had a great experience.

“Everyone was working together to create something really cool,” Ian said. “That’s what made it so much fun.”