On Her Way to Broadway

Senior Jamie Lapierre dreams of her name in lights 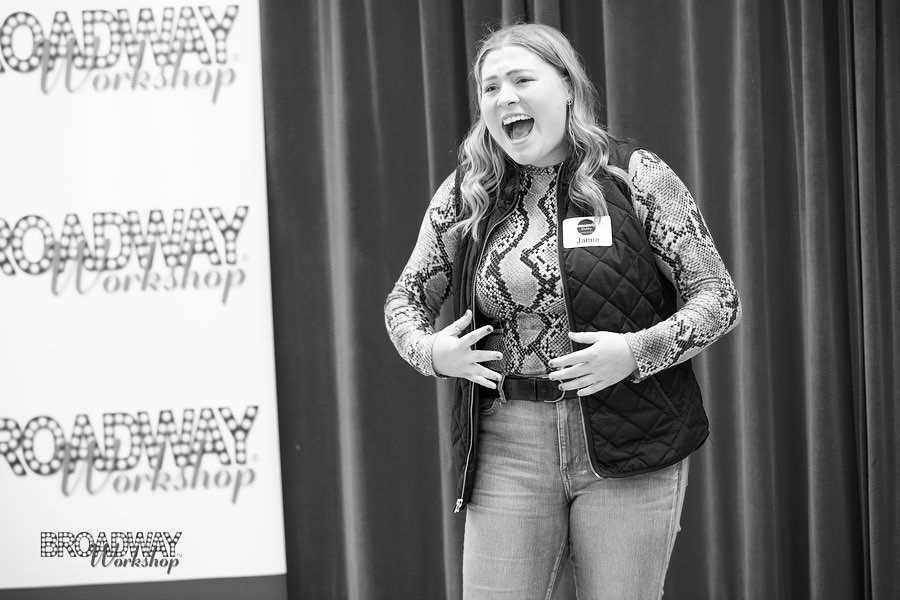 Senior Jamie Lapierre plans to study musical theater at American University next year. After spending much of her free time the past few years acting in school and community theater productions, Jamie hopes to make it big performing.

The mass of blonde hair waves around with every step taken. A bottle is pulled and lightly tipped back, all while the young woman dressed in a white dress shirt and pink work pants stumbles her way around bystanders right into a desk. As she sits in her chair, she lets out a loud laugh, an exchange of words, and takes another sip out of the nipper, without a care in the world. Everyone on the stage either gives her a soft glare or pays no mind at all.

For Jamie Lapierre, playing the workplace drunk was a completely different role compared to what she has done in the past. This role was more outgoing, and less reserved than what Jamie typically tackles.

A senior at Lewis S. Mills High School, Jamie has acted in multiple plays, three of which have been high school drama productions. Typically, Jamie would receive the shy character that was more reserved, the one who comes out of her shell near the end of the production. Yet Margaret, one of three female characters who take on a chauvinist boss in the late-February school musical “9 to 5,” was an extroverted drunk who had no problem being heard. The character was always positive and friendly, yet very outgoing.

“Margaret was a totally different experience,” said Jamie during an interview. “It was really fun to play because she’s so not like me.”

Even though Margaret presented a different role, it wasn’t exactly a hard one to fill. Jamie wants to find a future in theatre and understands that doing so requires knowing how to play multiple roles; you may play an outgoing, lead character one day and a quite reserved character the next. The sometimes fickle nature of the business makes finding a strong career in the arts extremely difficult.

Of course, Jamie knows that getting that big break in showbiz can be a daunting dream to chase, and has considered that harsh reality. Even with the amount of difficulty it takes to launch a strong acting career, Jamie and her supporters feel that she will make it.

“Before you get a yes, you’ll get a lot of no’s,” said Jamie, who also acts with community theatre groups and has volunteered at major venues like Waterbury’s Palace Theater. “It takes a toll on yourself mentally, cause you’re like, ‘Am I not good enough?’”

Kristyn Treggor, a choir teacher at Lewis Mills and Har-Bur Middle School, has known Jamie for eight years and feels that her drive and personality could bring her to the top. Mrs. Treggor noted that she always knew Jamie had talent, even as a middle school student, but never thought she would audition for any productions.

Mrs. Treggor explained: “Singing and musical theatre is just a difficult and competitive field to be in, so I respect the fact that she’s going in that direction. What she’s got going for her besides being a talented kid is she is one of the hardest workers I know, and she dives in headfirst.”

Pretty much everyone who knows her will tell you that Jamie is very hard working and driven. She’s always done well academically, and when she imagined a possible career in theatre two years ago, she decided to put her all into it.

Once she decided that she wanted to pursue a career in acting, she began auditioning for plays all over. Recently, Jamie acted in a play at New Britain’s Hole in the Wall Theatre.

“She’s always herself, like 100 percent,” said Jamie’s friend, Tyler Evans. “Now that we’re in high school there’s nothing holding her back. If she wants to do something, she does it, she just goes and reaches for the stars.”

Jamie’s peers often view her as a role model. Not only is she taking on the world with her dreams, she’s just an all-around great person, according to friends and teachers.

Even on her worst days, Jamie will be the first to make those around her laugh. She can be counted on when things get rough, said Tyler, explaining that friends never have to worry about her changing, because Jamie will always be the same person.

Of course, merely having talent and a grounded personality won’t reserve anyone a seat with the elites, since there’s much more to theater than being able to sing. Jamie admitted that although she can act and sing, she lacks the developed dance skills that a theatre major typically needs. Because of this Jamie is very open to receiving tips and lessons to improve her skills.

At first, Jamie never really thought of a career in theatre, she wanted to be a teacher. As Jamie continued to think about her career and realized that education wasn’t exactly for her, she considered careers in journalism and theatre. Both Tyler and Mrs. Treggor expected that if Jamie’s plans to become an actress don’t work out, she would find some way to be around the theatre.

“She’s always going to be around the theatre, if it’s on the stage or behind the scenes (be)cause that’s where she gravitates towards,” said Tyler. “She may end up doing journalism that has to do with the theatre.”

Jamie originally thought about minoring in theatre, said her sister, Olivia Lapierre, who is a freshman at Lewis Mills. But as Jamie progressed and spent more time on the stage, she decided to focus her studies musical theatre. She was recently accepted into a program at Washington D.C.’s American University, where Jamie explained that a couple hundred candidates auditioned alongside her and, from what she understood, only 11 were accepted with her.

Along with her classmates and teachers, Jamie’s family is super supportive of her choice in careers. Olivia described how her family will drive Jamie about two hours to New York City when need be. Olivia even helps Jamie run lines for upcoming shows.

Theatre may be one of the hardest professions to seek a future in, but many believe that Jamie can do it. She’s bright, cheerful, optimistic and, according to her little sister, annoying and terribly clumsy – mostly qualities that make a great performer, along with talent and drive.

Like many students at Lewis Mills, Jamie hopes to paint a shining path as she graduates this June, and if her determination is any indicator, it’s likely that this genuine, kind, and clumsy girl has a bright future ahead. Wherever she may go, be on the lookout, because one day you might just possibly see her name in the stars.

As her choral instructor Mrs. Treggor put it: “That girl is going places.”