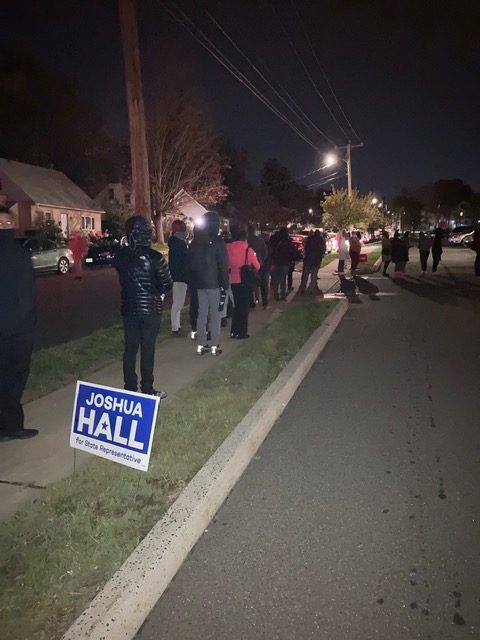 Connecticut citizens lining up to vote on election day 2020.

America day is typically an excuse for Lewis S. Mills High School students to don red bandanas and blue beaded necklaces and head to school decked out in their patriotic garments. This year, however, some students roamed the hallways with “Trump 2020” flags billowing over their shoulders, while others sported Black Lives Matter masks, Blue Lives Matter t-shirts, and Make America Great Again hats. The school was abuzz with talk of politics and the presidential election, then just two weeks away.

Students and staff across the school noted the political tension that appeared that late-October school spirit day. Dennis Fowler, history teacher and advisor of politics club, took notice of the occurrences on America day.

“If you looked at the hallways, you would see the divisiveness,” he stated.

Assistant Principal Jennifer Otte stressed that the political climate of America day was atypical, and that politics are only ever so prevalent in the school in special circumstances.

Mr. Fowler agreed, stating, “I think that the political environment that exists, not just in the school, but in the country, is the most divisive I have seen in a long time.”

In an email sent to all LSM students on Oct. 27, Principal Chris Rau shared a similar sentiment: “This past week, during spirit week, we saw some tensions among our students related to the upcoming election.”

While some people’s political beliefs may have been shared freely on that day, many students feel more timid about divulging their own. Senior Billy Hekeler falls in this category.

“I don’t feel comfortable sharing [my political views],” he stated, adding, “there are a lot of people who care way too much about who I would vote for.”

Hekeler also disapproved of when his peers try to persuade him to change his political views, either in person or on social media.

“I’ve never actually understood why people put so much on Instagram,” he mentioned, referring to the numerous political messages shared on the platform’s feeds and stories.

Clearly not one for demonstrative displays of approval for particular candidates or ideas (he explained that “people can get a little jazzed up”), Hekeler put his views on political chatter succinctly, urging peers to “just vote, dog.”

This reticence to discuss politics is a common theme among Mills students. Senior Makenzie Jones noted that although she wished she could partake in the election (she is still 17), she wouldn’t tell people who she was voting for even if she could.

“There’s so much controversy in the world right now, and I don’t want to be subject to either side of it,” she explained.

Business teacher Amanda Atwood said that although she tries to include political discussions during her lessons on topics that are affected by politics like taxes and student loans, students don’t seem to have overly strong opinions on the presidential candidates.

“Especially this year, I thought more students would have more of a thought about it, but it doesn’t really seem to be something people have discussions about,” she stated.

Lauren Fitzgerald, a senior who can vote for the first time this year, explained that her fellow students’ avoidance of controversy may be due to societal expectations, not solely personal preferences.

“It’s respectable to not discuss politics with other people. It’s seen as an improper discussion topic,” she stated.

The tendency to shy away from tough political conversations extends beyond the walls of Lewis Mills high school. Half of respondents to a national Pew research survey stated that discussing politics with people who disagree with their views is a frustrating and stressful experience.

Fowler, however, noted that he sees a large number of passionate participants in the school’s politics club, with people leaning both conservatively and liberally. He attributed much of an increase in student engagement to the current president’s unconventional engagement with the public.

“Trump has brought a lot of people, a lot of kids, into the political arena that were never there before,” he said, stressing that this new interest spans the political spectrum. He added, “more people are involved than I’ve ever seen in my twenty years of education.”

To adapt to this time of political awareness, both in the school and the United States, Regional School District 10 has formed equity and social justice teams. These teams have launched a study of the district’s curriculum to ensure that it adequately addresses issues of equality.

“Politics tends to blend into those conversations,” explained Otte, the assistant principal.

Otte said that these teams will help address the question of how to facilitate respectful discourse about difficult or controversial topics.

“One of our goals at the school,” she stated, “is to raise the comfort level of all teachers talking about equity issues.”

Fowler is one staff member who has grown comfortable mediating civil discussions about hot-button issues through his experience leading politics club. He has some ground rules that ensure peaceful and effective conversations.

Fowler stated: “Our opinions should be able to be expressed freely and without being criticized, but if you don’t do it in a respectful and appropriate way, I’m not going to let you speak.”

Atwood has a similar philosophy, noting, “we have to be appropriate with the wordings we use; I want to make sure it’s a comfortable environment.”

A unique quality of this school environment is that most students cannot vote. For the recent election, only seventeen Mills students were of voting age.

Otte mused, “It’s interesting how involved some people are in some of these topics when they can’t really participate,” referring to the low number of eligible voters in the school.

The 2020 presidential election may be history now, but if America Day is any indication, the political conversation at Lewis Mills High School will be ongoing, even as students vote with their words instead of ballots.