Dancing Her Way to the Future 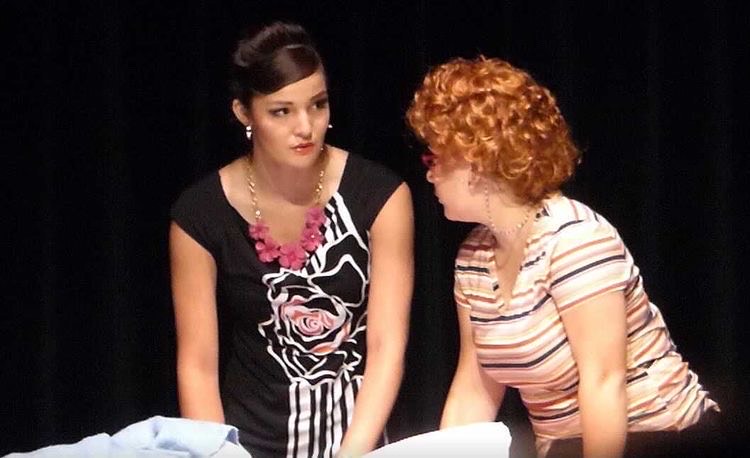 As temperatures start to drop and trees become barer, many seniors across the country inch closer to the application deadlines for their colleges of choice. Some students have been finished since the sweltering days of summer, while others are putting years of practice in procrastination to good use, saving their application until the last minute. For Lauren Fitzgerald, a Lewis Mills High School senior who is planning to study musical theater next year, the application process is already well underway, but still without an end in sight.

There’s no dancing around it: applying to the selective musical theater programs she’s dreaming of requires a lot of work. These include schools like Pace University, University of Michigan, Boston Conservatory at Berklee, and Ithaca College.

Lauren started thinking about college specifics when she was a sophomore. She began her process like most students, with independent research and campus tours. This past March, she began working on her actual applications and supplemental materials.

What differentiates her application process from that of others is the amount of work involved. This budding star is applying to a whopping 24 schools. For each, she must complete three distinct stages: an academic application, a pre-screen, and, if she receives the opportunity, an audition.

The academic application consists of the Common Application or a school-specific application and at least one supplemental essay, but often two or three. Since the Common App only allows a user to select twenty colleges to apply to, she must complete several applications outside of this convenient tool.

Completed simultaneously is the pre-screen, where she must submit two videos of her singing, two monologues, and a dance. If she advances past this, she’ll find herself auditioning, live on Zoom this year because of the pandemic.

Luckily, she has a lot of experience under her belt, having participated in school plays since her freshman year as well as productions by Get Up Stage Company and Avon Summer Theatre.

With this in-depth application process, Lauren expresses gratitude to have an ensemble of supporters behind her. Her mother, Ginny Fitzgerald, has offered her a lot of support and guidance.

“I’m the nagging momager,” Mrs. Fitzgerald jokes. “My role is to follow up with her consistently.”

Although Lauren sings the praise of the schools she is applying to, she also stresses how hard it will be for her to get accepted.

Referencing the possibility that her pre-screens and auditions may not be up to the schools’ caliber, she states that “it could be quite possible that I apply to all [approximately] 25 of these schools and get in artistically to zero.”

For some musical theater programs, between 500 and 800 of 4,000 applicants will receive auditions, and only 15 or 20 are ultimately accepted.

Still, Lauren seems to be giving a solid performance in her application process so far. She has finished all her academic applications and pre-screens and has nine auditions scheduled. She has heard back academically from three schools.

She has also already been accepted into AMDA, the American Musical and Dramatic Academy, although its lack of a typical college campus and culture relegates it to only a backup choice in her mind.

Long Island University has also granted her acceptance and has offered a full scholarship based solely off her academic credentials.

As Lauren anticipates other results, expecting to not hear back from some colleges until March or April, she tries to keep a healthy mindset despite the stress.

She states, “Normally I consider myself a pretty healthy person mentally but there have definitely been some days where I have felt overwhelmed.”

Looking ahead to her upcoming auditions, she states that “audition season is also supposed to be really stressful, and I’m not there yet, but I’ll take it one step at a time.”

Lauren is not the only one completing this grueling process. She explains that she is part of a Facebook group with around two thousand other individuals completing the exact same steps, on just as large a scale.

Mrs. Ginny Fitzgerald stresses the value of knowing like-minded individuals who have insight into this undertaking: “There’s a lot to know about this process where if you’re not in the business, you just don’t know.”

Still, no number of connections or amount of advice can eliminate the mental and emotional toll that the process takes on an applicant, Lauren explains.

“There’s a lot of rejection in this process,” she notes. “You need a lot of mental intelligence to get through it.”

For her, though, the idea of pursuing her passion for musical theater and her end goal of performing on Broadway make the stress worth it. Even as early as eighth grade or freshman year, she recognized that her anticipation for show rehearsals was unrivaled by her enjoyment of any other activity.

She states that “the fun wasn’t just the performance but every step it took to get there, from the first read–through until tech week.”

The musical theater lover has many more application steps and some uncertainty ahead of her as she takes center stage in her future. If she gets into one of her dream programs, she’ll be dancing on air, but whatever happens, the show must go on.