From humble beginnings to Emmy Awards

TV personality with Connecticut ties plans his next act 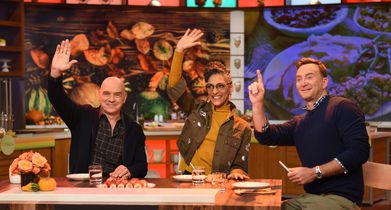 Clinton Kelly, far right, appeared on the ABC show "The Chew" after his profile rose with the hit TLC reality show "What Not to Wear." He lives part-time in Litchfield County and is the brother of Mills Foreign Language Department Chairperson Jodiann Tenney.

From a young age, Clinton Kelly, celebrated writer and on-air personality, had a vison for his future: he was going to be rich and famous. Growing up with divorced parents, money was often an issue, explains Jodiann Tenney, sister of Kelly and coordinator of the Lewis Mills Foreign Language Department. She says that she believes this was the leading cause of his vision for success, and she adds that this view of his future wasn’t selfish; rather he was driven by the will to never financially struggle again. Although a host of numerous shows such as “The Chew” and “What Not to Wear,” Clinton Kelly’s vision was never to be on television – he always wanted to be a writer.

Kelly attended Boston College for his undergraduate degree in communications, and then furthered his pursuit of writing by earning his master’s degree at Northwestern University. “What people sometimes struggle to understand is that I’m not in TV because I wanted to be on television,” Kelly says. He then goes into further detail to explain his unexpected rise to fame. As “How-To” reality TV was emerging in the 90s, casting agents were looking to magazines to find hosts with experience on their topics. Consequently, as Kelly was a writer for fashion magazines, an agent for men’s fashion emailed him and asked if he would be interested in auditioning for the show “What Not to Wear” – a show where people are given fashion consulting and will then spend a week shopping for entirely new wardrobes. Often, these people are nominated by friends and family, and are not aware they were signed up for the show.

“And the rest is history,” Clinton Kelly reflects. The fact that becoming an on-air personality was not a goal for Kelly actually played a key role in his success. Unlike other television hosts, on “What Not to Wear” – which ran from 2003 until 2013 – it was evident that Kelly cared more about the well-being of the people, rather than show ratings or reviews.

Coming from someone who has watched the show in the past, Brynn Mandel, an English teacher at Lewis Mills High School, has nothing but positive things to say about Kelly. “To him, it wasn’t about the clothes – it was about making women feel good,” she says. “He did a really good job at being in women’s corners.”

In addition to “What Not to Wear,” Kelly is also known for his time spent on “The Chew” – an American-themed cooking talk show that aired on ABC from 2011 to 2018. Unlike his other shows, Kelly describes “The Chew” as “a complete blast.”

“I spent time eating, drinking, interviewing celebrities, and playing games – all with my friends. I couldn’t have had a better dream job,” he says as he reflects back on his time on the show. Now done with both shows, in addition to residing in Manhattan, Kelly also lives in Litchfield County. After living in Manhattan for 20 years, he decided he needed a home outside the city, and chose to settle down near his sister. He explains that he looks much different in his town than he does on screen. “I got my baseball cap on, my hoodie on,” he laughs. “And when people see me, they’re just like ‘Oh, there’s that guy from that show again.”

Jodi Tenney claims it was hard for her and her family to get used to her brother’s fame at first. She reflects on the first few times he was recognized. Referring to herself and her family, she laughs and says, “We would all be like: ‘Why are they coming up to you?’”

Years later, Clinton Kelly shares that he’s currently in the midst of pitching a new show. While he can’t share much, he does explain that he’s in no rush to do a show he’s not passionate about. “I want a show that I’m excited to wake up every morning just to go to the set,” he says. Kelly’s dream, however, would be to one day not have a job, and to be able to spend his time writing. Television is strenuous, and Kelly shares that while shooting “What Not to Wear,” there was a time where he was completely burnt out and ready to quit. He elaborates that for every minute of airtime, the crew would spend an hour shooting – translating to roughly an 80-hour workweek.

Reflecting on both these struggles and his passion for writing, Clinton Kelly leaves students with career path advice: “Realize that life is long – you should spend your days doing things that make you feel good,” Kelly says.

He pushes kids to find hobbies in which they’re left shocked with how fast time went by, and urges them to do their best to then make a career out of it.

Kelly acknowledges that while not every day will be fun, careers should be made based upon personal interests, rather than materialistic ones.