Is the Class of 2022 the richest class in Mills history? 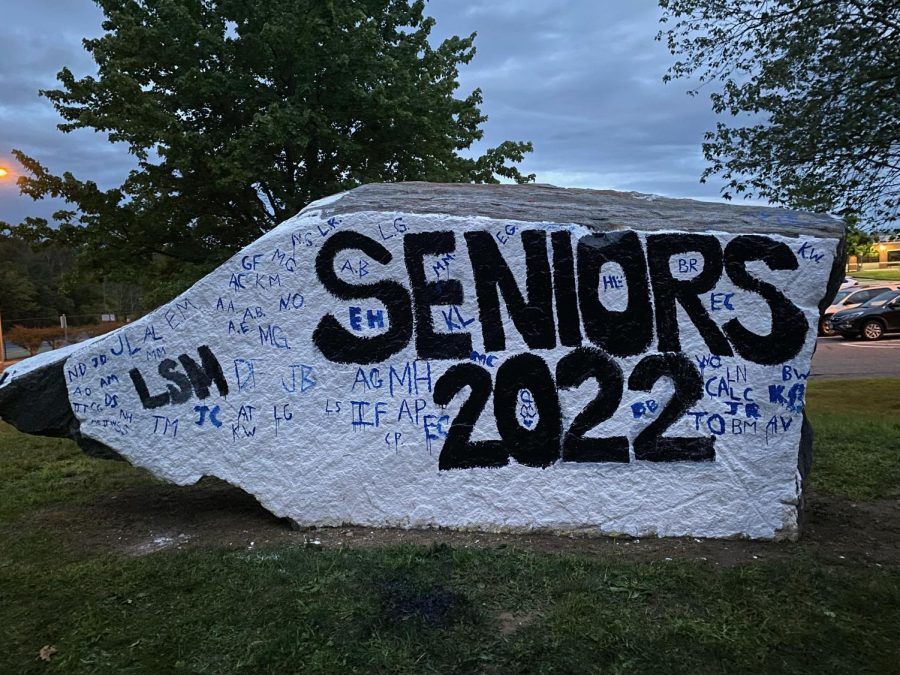 The spirt rock outside of Lewis Mills celebrates seniors.

Senior trip, prom, tickets, and graduation – the luxuries of senior year are long awaited rewards for reaching the final stretch of high school, but these events also come with expensive costs. Meeting these costs requires the hard work, unity, leadership and passion demonstrated by the class officers and advisors.

How did we get here? It all started during sophomore year, when class officers for the current seinor class have elected. The money aspect can be hard to juggle, but the Class of 2022 officers and advisors have demonstrated strong leadership each passing year which has assured success for their last one, which has finally arrived.

In the past six years, the Class of 2022 has raised the most money of any class and is proudly representing the school as a perfect financial model for other grades. Class President Adam Ammirata claims, “Mr. Rau has told us before we are the richest class he has ever encountered in his time as principal of Lewis Mills thus far.”

Rebecca Edwards, one of the class advisors, who has been with the Class of 2022 since freshman year all the way to senior year, shares that the magic is a mix of good class advisors and officers who can construct idea after idea. Stacy Begert is the other class advisor, and together they collaborate with the officers to achieve great things.

So how are they able to raise so much money?

“Fundraisers, and great ideas. The students on council accumulate ideas from other aspects of their life, and collaborate, taking in suggestions and following through,” Edwards states.

“Munson’s chocolate, bottle drives, and food have all been fundraisers that bring the community together while raising money,” Edwards adds. She also admits some revenue more money than others, even ones you wouldn’t expect. For example, the chipotle fundraiser and food outing ones, as fun as they are, they don’t collect the most money at the end of the day. The bottle drives however, as “boring” as they may seem, are the most beneficial.

Treasurer, Noah Dube, has been keeping detailed accounts since sophomore year, starting with 2018/2019 just under 2,000 dollars to over 12,000 dollars in 2021. He keeps this all in an excel document, that all officers have access to, to review record.

Senior Class President Ammirata shares the time and commitment it takes to be a class officer. He claims the amount of time depends on the time of year and what activities the class is running at the time he reveals. When homecoming is approaching, there are a lot of meetings that go into making sure everything runs smoothly. They need to design the bleacher decorations and discuss what money they willing to spend on it. Without going into the specific process for each fundraiser, he shares there is always time spent before, during, and after a class event. The other three officers along with Adam, Marissa Gnitzcavich, Noah Dube and Matthew Gorski with the help of class committees, put a lot of time and effort into making sure money is stable and events are organized. They certainly work hard throughout the year to do this.

A prominent event organized by the class council is, the senior trip, the one that every class looks forward to. It’s a fun way to enjoy a day out with your friends, as it’s the last year everyone will be together.

Being a financially stable class had allowed the trip to run smoothly. Edwards says that they were able to put all the deposits down, buses were secured far in advance, and they paid for duck tour tickets up front.

If  there is anyone to thank for the day off from school, and luxury bus ride, thank the officers and advisors.

However, some past classes have not been able to come together as diligently, and while it’s not one person’s fault nor something to look down on, it’s important to address some of the downfalls that future classes can avoid.

Joanne Ramsey who was an advisor for the class of 2019, freshman to junior year, looks back in her time and acknowledges that there was a problem with unity in the class office. In her mind she was unable to convince them to follow through and although everyone wanted to succeed, the necessary steps to make it happen didn’t happen.

Because of that, the Seniors that year were not able to have a normal senior trip like most classes. They were able to do an event, but did not have enough money to take an out of state trip with paid buses.

Being financially short is something that any class can run into, and instead of taking it as a negative, it’s important to learn and grow from it. Although this class council may not have run as smoothly, it’s imperative to recognize it takes everyone to be involved, and no one can point fingers to just one problem.

Her strong  advice to other grades is, “Including everyone is a real key to a successful class, early on getting every kid to realize that they have something to contribute is important, make it fun.”

So what can you take away from this?

The class of 2022 has elected very dedicated and hard-working officers who always put the good of the class above everything else. They know what it takes to raise money and what ideas work and what don’t. With the experience of Edwards, and help of Begert, and effort from both sides, the Seniors should look forward for the rest of the year, being in safe hands.